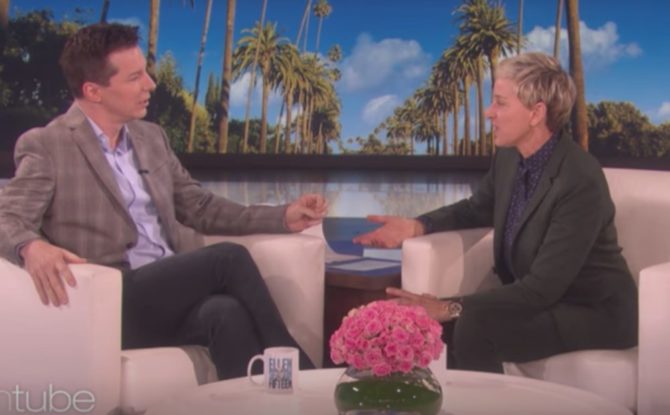 Two weeks ago, Sean Hayes had quite the health scare.

The star of the freshly reanimated Will & Grace stopped by The Ellen Show to tell DeGeneres his harrowing tale of woe: He suffered some severe pain after his small intestine burst open, sending a cascade of potentially fatal toxins into his body.

To hear him say it, he woke up that night in delirious pain:

“I went to bed at night and all of a sudden I felt this excruciating pain in my stomach. So I went to the ER and, thank God I did. I had a very rare thing where my small intestine burst open and it was poisoning my body.”

They went in there and clipped off the bad part and put it back together.”

The incident forced him to cancel his work commitments for several weeks while getting back on track. In fact, his appearance on Ellen had to be postponed by two weeks.

After this harrowing back-and-forth, Hayes and DeGeneres leavened the mood by playing a game: Hayes brought the breathing device he’d needed to use in the hospital… and that’s where the laffs really begin.

“So, what you do is you suck in, and you breathe. It’s for your lungs, so you don’t get pneumonia because it could build up fluids in your lungs. So it’s to keep your lungs strong.”

He challenges Ellen to see who can outperform one another on the device:“Whoever can suck their balls the hardest wins!”