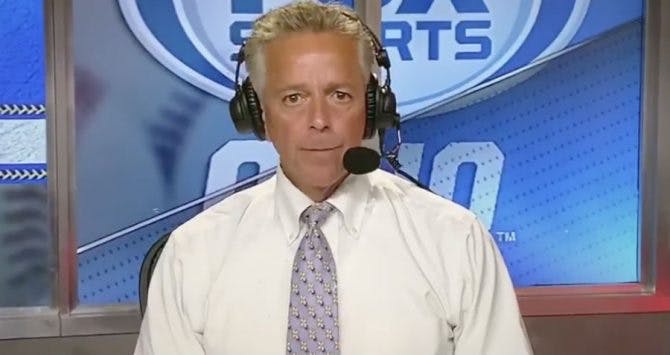 Sportscaster Thom Brennaman was fired from Fox Sports last September after he casually dropped an antigay slur during a Cincinnati Reds game. Now, the 58-year-old just gave an ill-advised interview in which he claims his punishment didn’t fit the crime, he’s a good Christian man, and, oh yeah, “all lives matter.” Ugh.

In case you need a refresher, here’s the clip of Brennaman referring to an undisclosed location as “one of the f*g capitals of the world” during a Cincinnati Reds game last year:

Reflecting on that moment to Sports Broadcast Journal, Brennaman, who previously said that was the one and only time in his life he ever used the word “f*g”, now says he knew his career was over almost immediately.

“The moment it left my lips, I knew it was over,” he says. “It was just a matter of time. I anticipated a suspension and lots of backlash.”

But instead of being suspended, Brennaman was fired by Fox Sports. He didn’t work for several months before finally accepting a job broadcasting high school sports in the Greater Cincinnati Area earlier this summer and launching a podcast.

Now, he says, people are clamouring for him to return to major league sportscasting.

“Although I’ve met Bob several times since, I can’t say I know him well,” he claims. “But Costas has been amazingly helpful. He’s told me that the crime doesn’t match the punishment.”

“All I can tell you is that I remain a good father and a good Christian,” Brennaman adds.

In the interview, he also talks about sportscaster Grant Napear, who was fired from calling for the Sacramento Kings after tweeting “all lives matter” during the George Floyd protests last year.

“What did he do?” Brennaman says. “If we live in an environment that BLM matters, don’t all lives matter? That makes you a racist? How ludicrous is that? Napear is one of the great guys in our business.”

Sounds like this guy still has some learning to do.