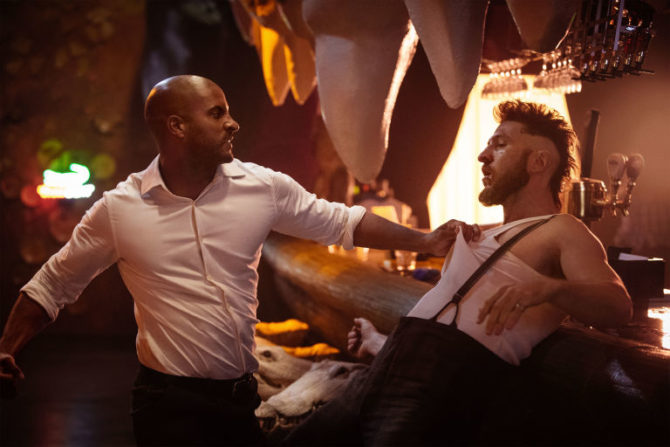 We have a feeling you’re about to be hearing a lot of chatter about American Gods, the new Starz series adapted from the 2001 Neil Gaiman novel of the same name.

The first episode aired April 30th, and featured a sex scene that left viewers’ jaws on the floor. But it’s the third episode’s romantic escapade between two Muslim male characters that is shaping up to be a serious gay water cooler moment.

The fantasy series follows gods of various ancient cultures as they face off with newer, American-born gods like Technology, Media, Celebrity, etc.

In Gaiman’s novel, a Muslim man named Salim (Omid Abtahi, Sleeper Cell) immigrates to New York City, where he winds up selling knick-knacks. He meets a Jinn (a spirit in Muslim mythology able to appear in human and animal form) taxi driver, and the two take off to a hotel room to have sex.

“We both cited Salim and the Jinn (Mousa Kraish, Munich) as one of the most memorable, touching romantic chapters of the novel,” the show’s out writer and director, Bryan Fuller, said in a recent interview with his producing partner, Michael Green.

“And so, we took great care and were very deliberate in how we brought that to life so it reflected the romance of the novel. We also added a few notions about a particular gay experience, coming from a man who originates from a country where you can be thrown off a rooftop for being gay.”

At another press event, he added: “[It] was not a small feat for two gay Muslim characters to have a beautiful, sophistical, sexual experience and what it was like for us to visually give you an idea of what it’s like to take a god inside you. I felt like it was a wonderful metaphor for a religious experience.”

One of the series’ stars, Ian McShane, chimed in: “I love what the straight actor said to you, remember? He told you, ‘I understand. Just when you’re doing the special effects, give me a beautiful c*ck, OK?”‘

“And we did,” replied Fuller.

Here’s what TV editor at Paste Magazine had to say about the scene:

Among its other merits, "American Gods" has the hottest gay sex scene I've seen on TV since "Sense8," maybe ever. It made my palms sweat.

Here’s a short passage from Gaiman’s novel that describes the encounter:

The taxi driver comes out of the shower, wet, with a towel wrapped about his midsection. He is not wearing his sunglasses, and in the dim room his eyes burn with scarlet flames.

Salim blinks back tears. “I wish you could see what I see,” he says.

“I do not grant wishes,” whispers the ifrit, dropping his towel and pushing Salim gently, but irresistibly, down onto the bed.

Catch American Gods on Starz or Amazon. Episode three, which features the above scene, airs May 14th.