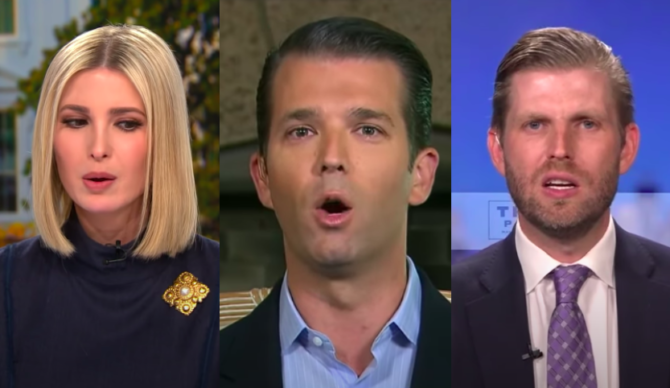 Speaking to Don Lemon on CNN this week, Dean was asked about the ongoing investigations into the Trump Organization and whether the adult children of the ex-president might be in trouble.

Earlier this month, Don Jr. was deposed as part of the Washington, D.C. Attorney General’s lawsuit alleging the misuse of Trump inaugural funds. Jr. is also at the center of the Manhattan District Attorney’s office into the Trump Organization’s finances.

Related: Ivanka freaks out on Twitter after being deposed by DC attorney general in ongoing investigation

“I think they should be worried,” Dean said matter-of-factly. He went on to explain that the Trump family has managed to weasel their way out of trouble with Manhattan DA Cy Vance in the past, but he doesn’t think that’s going to happen this time around.

“I don’t think [Vance] looks very favorably on the Trump family anymore, and he wants to clean up his reputation,” Dean said. “So, he’s probably being very aggressive about them and pursuing any potential criminality.”

On Monday, the U.S. Supreme Court denied Trump’s last-ditch, years-long effort to keep his tax returns and other financial documents out of the hands of prosecutors.

As a result, millions of pages of documents were turned over the the Manhattan D.A.’s office, including tax returns, tax prep documents, financial statements, and communications related to the tax returns.

“This is going to show how they prepared the tax returns over the last eight years that they’re looking at. The memos back and forth. Records of phone calls where the accountants were being instructed. So, if there’s malfeasance, non-feasance or misfeasance in there it’s very likely to be in that terabyte.”

Circling back to Don Jr., Dean explained that his involvement in the family business appears to have been limited, largely due to the fact that “his father didn’t have the greatest faith in his skills and abilities and he was often kept out of things.”

And all this time, we thought Eric was the dumb one.

Dean concluded by saying that there are a lot of directions the cases could go, and it will likely take time to sort everything out.

“Who knows where all this is going to go?” he said. “The conspiracy law in New York is very broad, as most states have, and they’ve been operating clearly in secret for a long time. And that’s what Mr. Vance is looking at. So, I think he’s got jeopardy.”