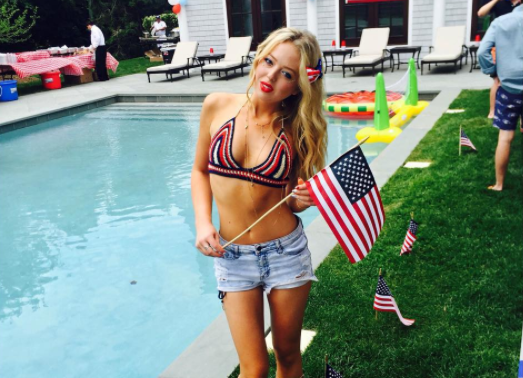 Look out, world! Donald Trump‘s youngest daughter, Tiffany, is finally ready for her moment in the spotlight!

Wikipedia lists Tiffany Ariana Trump’s occupation as “Internet celebrity, model, singer.” Now, it appears she may be hoping to add yet another feather in her cap.

Borrowing a page from her older sister Ivanka’s playbook, the 23-year-old Kappa Alpha Theta sorority girl is said to be launching her very own “lifestyle brand,” which will specifically cater to… LGBTQ people?

Related: Wait, what?! Ivanka Trump laughs her way to the bank as her brand’s sales skyrocket

“Tiffany’s been around gay people, like, her whole life,” a source close the only child of Donald Trump and Marla Maples said on April 1. “Her BFF is totally gay, and so is her riding instructor. They’re all constantly asking for her opinions on stuff, so she figured, hey, why not make it into a business?”

For the record, Tiffany does not identify as LGBTQ herself.

The brand is rumored to include an online magazine, as well as an online catalogue that will sell everything from home goods to clothing and accessories, all hand-selected by Tiffany.

“Think Gwyneth [Paltrow]’s site Goop, but for gays,” the source says. “Tiff has, like, a really amazing eye for the things gay people are into. Sometimes she jokes that she used to be a gay man in a past life!”

Related: But of course Donald Trump is giving the commencement speech at a university that bans LGBTQ people

The source says Tiffany also hopes the brand will help clear up some of the misconceptions people have about her family’s stance on LGBTQ people.

Since Donald Trump took office in January, the White House has deleted the LGBT rights page from its official website, axed the White House Office of AIDS Policy, announced massive cuts to the HIV/AIDS research budget, and said it was eliminating LGBTQ citizens from the 2020 census.

“A lot of people have this idea that they’re, like, against the gays or something, but that’s just not true,” the source says. “Nobody respects LGBTs and Qs more than them. And Tiffany’s new brand will prove that.”

We wonder if the brand will be as successful as her 2014 foray into music?

Here’s wishing Tiffany all the best on her latest endeavor, and all of you a very happy April Fool’s Day!

Subscribe to Queerty for a daily dose of #life #aprilfool'sday #didyoufallforit? stories and more