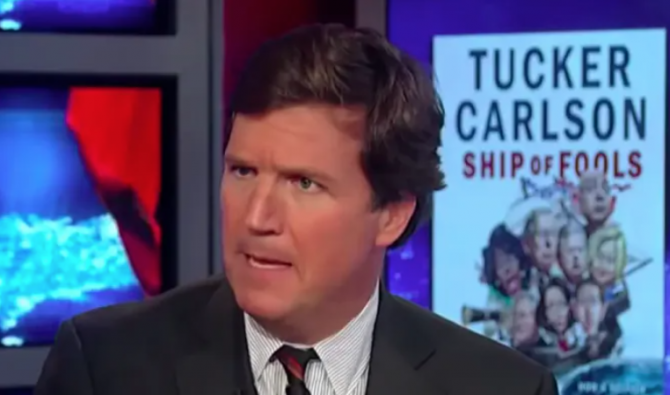 Fox News personality and professional brow furrower Tucker Carlson has once again put his transphobia on display. In a rant aimed at the Biden Administration and the recent appointment of Dr. Rachel Levin as a four-star admiral, Carlson called everyone “crazy” and “ridiculous.” Projection much?

As first reported by our sister site, LGBTQNation, Dr. Levine became the first out-transgender four-star officer in all eight of the uniformed services this week. The vote to confirm her nomination was bipartisan.

She was also named Assistant Secretary for Health at the Department of Health and Human Services (HHS), where she will lead 6,000 Public Health Services officers — physicians, nurses, dentists, veterinarians, scientists, engineers, and other professionals. Dr. Levine previously served as Physician General of the state of Pennsylvania.

This was all too much for Tucker Carlson to comprehend.

Related: Tucker Carlson reveals his true colors and boy, what a gross palette

“Behind the heavily guarded walls of the White House everyone has gone crazy,” Carlson railed. “Just this week, the Biden administration declared that a biological man who wears a dress is now a female admiral. And then they sent that brave four-star female admiral out to give a speech that read like something out of a D-Day documentary.”

He called it all “ridiculous” before making a comparison that may as well be the dictionary definition of “ridiculous.”

Watch the full video below, or don’t: