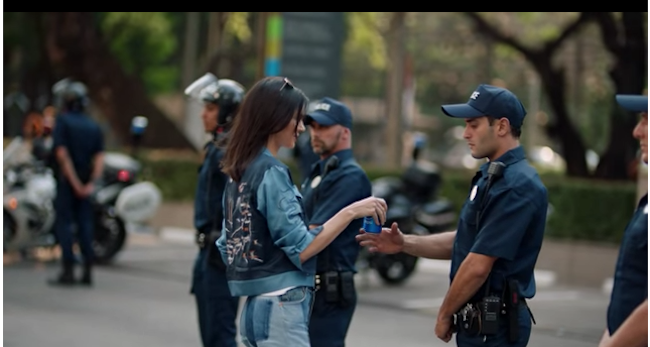 In a conference room deep inside Pepsi HQ, someone is being screamed at as we speak.

The company’s facing huge backlash over its new commercial, which stars Kendall Jenner as a bewigged model who abandons her glam photoshoot to join a roaming protest passing through the street. Because priorities and she knows what’s truly important in life.

For reasons that will become readily apparent to anyone who watches the two-and-a-half minute spot, people are accusing the soda company of trying to turn political protests into something trendy, fashionable, and ultimately superficial.

Pepsi defended the ad in a statement:

This is a global ad that reflects people from different walks of life coming together in a spirit of harmony, and we think that’s an important message to convey.

Of course, Twitter’s having none of it:

What @pepsi thought they were doing… pic.twitter.com/EdxAtGbKF7

"Yo Kendall I'm gonna need you to get over here with a Pepsi" pic.twitter.com/2jT7pImZzr

Yikes! If you don’t like that #Pepsi commercial, you’re definitely not going to like @CocaCola‘s new ad pic.twitter.com/dnT6FSHiK3

*maybe if i drink enough pepsi I won't get racially profiled n called a terrorist* pic.twitter.com/fwYhVllvVW

If only the girl on the bottom had a Pepsi pic.twitter.com/hrzUy90iuR

Who among can forget when Kendall Jenner bravely passed out Pepsi’s & ended the Vietnam War!#PEPSI #pepvideo pic.twitter.com/AkxfdbiZDb

Us: Kendall come march with us for injustice and our rights!

J. Edgar Hoover takes aim from the grassy knoll. The motorcade approaches. He fires. JFK raises a #Pepsi to his lips, blocks the bullet.