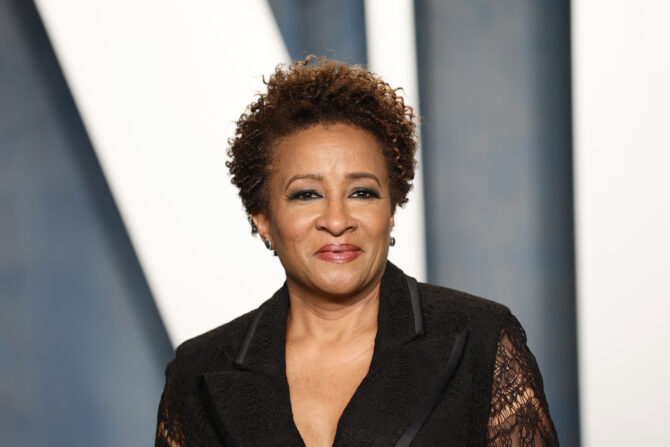 The 58-year-old comic’s career continues to reach new heights. In the past year, she guest-hosted Jimmy Kimmel Live! and saw the renewal of her hard-hitting comedy series The Upshaws, the second season is set to premiere on Netflix later this month.

Her stint on Jimmy Kimmel Live! ended up being the perfect dress rehearsal for the 94th Academy Awards, which she co-hosted alongside Amy Schumer and Regina Hall in March.

She killed it on stage, and her triumph should be reason enough to add Miss Sykes to our Pride 50 list. Unfortunately, however, she was outshined by the “slap heard around the world” when Will Smith assaulted Chris Rock live on stage.

Afterward, Wanda spoke out against the violence, at a time when some comedians chose to side with Smith.

“For them to let him stay in that room and enjoy the rest of the show and accept his award, I was like, ‘How gross is this? This is just the wrong message,’ ” Sykes told Ellen DeGeneres. “You assault somebody, you get escorted out of the building and that’s it. For them to let him continue, I thought it was gross.”

A longtime friend of Chris Rock, she added “I just felt so awful for my friend Chris. It was sickening. I physically felt ill.”

Their friendship goes back to 1995 when she got her big break opening for Rock. She later joined the writing staff of The Chris Rock Show in 1997, earning the show four Emmy nominations and one win.

After that, Sykes broke out on her own, landing countless comedy specials and eventually winning the 2001 American Comedy Award for Outstanding Female Stand Up Comic. That was followed by her own late-night talk show, The Wanda Sykes Show, as well as appearances on Wanda at Large, Crank Yankers, Big Mouth, The New Adventures of Old Christine, Black-ish and so many more.

In addition to delighting her fans on tour, Sykes is currently working on History of the World Part 2 with Nick Kroll, the long-awaited sequel to the Mel Brooks classic.

Had a fun as shit time filming “History of the World Part 2” with @iamwandasykes and @kymwhitley and whatnot. Thank you @nickkroll and some young whipper-snapper named @MelBrooks. pic.twitter.com/hOI6MwfOLB

We’re proud of Sykes not only for her extensive body of work but for her ability to keep us laughing just by being her authentic, real self.