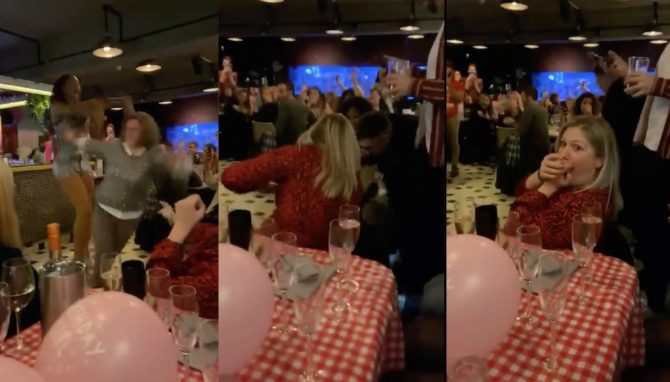 A drag queen has sparked debate after a video clip of her pushing a customer off stage went viral.

Cara Melle, the London-based queen in question, encountered the rowdy patron during a drag brunch performance of Mariah Carey‘s “All I Want For Christmas is You.” As the woman took to dancing on one end of the stage, Melle strode over to her and gave her a swift push, knocking her into the crowd.

In a surprising twist, Melle found herself attacked by other drag queens for her behavior.

“That was more than just a ‘get off my stage,’ tweeted former American Idol star Ada Vox. “That was inappropriate and unprofessional. If the woman was injured, which is very possible with a push like that, is also a lawsuit for both the performer & the venue with video evidence.”

Maybe after too many Prosecco’s @theexhibit #balham but still as @RuPaul taught us #DragIsNOTaContactSport ! #SafetyFirst pic.twitter.com/IkItNJaUxT

Melle then went into damage control on Instagram, issuing an apology of sorts. “I apologized to her, we took photos after, she is fine,” Melle said. “She had a great time, she got two bottles of Prosecco to go home with! She had a fabulous time, we took pictures together, we kiki’d and I felt horribly for it. Honestly, it ate me up.”

She also added: “Once again, I apologize to her, with my whole heart sincerely. If she ever sees this, I apologize to you. I should not have ever pushed you that hard. I’m not for violence, I’m not for abusing women, that’s never been my character.”