Ever-prolific gay, underground filmmaker Todd Verow (Frisk, Little Shots of Happiness) returns with his latest feature, an ode to the gay pornography of the 1970s and memorial to the gay men—and queer culture—killed by AIDS. Goodbye Seventies plays like a gay version of Boogie Nights and Summer Stock: a group of bathhouse friends decides to make an adult film together, which becomes a surprise success. Their newfound filmmaker credentials soon bring plenty of money and drugs, before AIDS brings it all crashing down.

Verow’s style recalls the earliest films of the New Queer Cinema movement: gritty, low-budget production values give the movie a surreal tone and the film embraces an in-your-face attitude toward nudity and sexuality. Though it may appear amateurish at first glance, that’s the point: Goodbye Seventies pays homage to both the gay culture of the 1970s, and the explicit gay cinema of the 1990s that saw films such as Swoon, Poison, and RSVP push the envelope of gay sexual content. Graphic, very stylized and—much to our surprise—moving in an odd way, we suggest giving it a watch as both a primer to two important decades of queer history, and as a deep, if sexual, personal statement from someone who experienced both.

The Educational: DotGay presents The Dictionary – A Web Series

Genderqueer or non-binary? Bisexual or pansexual? Transsexual or transgender? With LGBTQ labels and terms seeming to fall in and out of fashion by the minute, we happily report that somebody has finally taken steps to explain what some of these terms mean, and why use of one might be preferable over another. The Dictionary, a new web series, features a diverse group of LGBTQ people explaining the differences and nuances associated with different labels as well as some once-commonplace terms that have fallen out of use, or that can have multiple meanings. It’s a refreshing and fun take on queer language that has long needed a bit of standardization, and a useful tool for anyone confused by certain terminology and a bit too nervous to ask a public question. Episodes include examinations of “polycule,” “gold star gay,” “switch-hitting” and our personal favorite, the importance of “safe spaces.”

Anyone with the peculiar taste for short films will not want to miss FlickFair, the new, online film festival made up of dozens of short films. That includes movies that have played—and won—prestigious film festivals such as Sundance, TIFF, Outfest and Frameline. Our must-see title: On the Floor, a bizarre mix of music, surrealist imagery and gay romance from directors/stars Corey Koepper and Alexander Gheesling. Frankly, even after watching the short multiple times, we’re still not sure what it’s about exactly. That doesn’t mean it didn’t hold our interest, or announce Gheesling and Koepper innovative stylists. What a beautiful, surreal, gay feature they might one day make.

Festival passes available on the FlickFair main site. On the Floor is available through March 31.

The Inspiring: Harma Hartouni’s Getting Back Up – A Story of Resilience, Self-Acceptance & Success

Armenian-American entrepreneur Harma Hartouni goes public with his experience growing up gay in a Muslim country in this, his new memoir. Getting Back Up details Hartouni’s life growing up gay in Iran, his recovery from a devastating car accident that left him almost cost him his ability to walk, his emigration to the US, and finally, how he came out and found love. It’s an inspiring story of stubborn resolve, perfect for anyone needing a bit of motivation in his life.

We here at Queerty always love a woman that knows how to rock, especially a queer one. How fortuitous, then, that a reader tipped us off to Singaporean femme rock group Paper Citizen’s latest track, “Scratching the Surface.” Recalling the sweet vocals overlaying the shredding guitar that distinguished Sheryl Crow, The Breeders and Veruca Salt, “Scratching the Surface” meditates on a rapid-pace world driven by digital technology, and how said tech influences interpersonal relationships. It’s a rock-pop blend that still manages to be upbeat and cheery, even when dealing with a dark question. 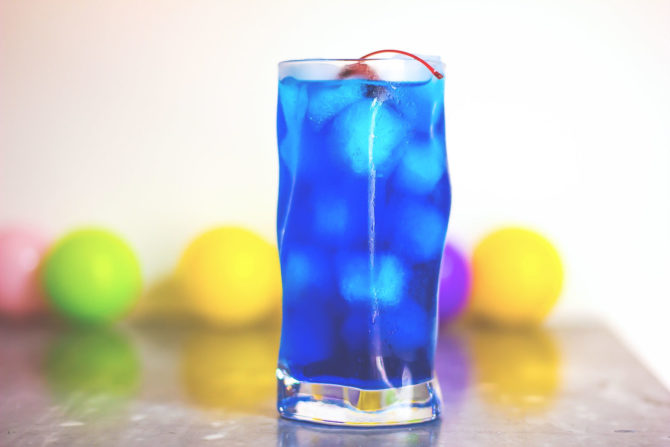 As an ode to the love letter that is Goodbye Seventies, we suggest sipping on one of the most popular fad drinks of the 1970s, a Blue Hawaii. A sweet, pineapple-flavored libation with one hell of a Hawaiian punch, it pairs well with any of this week’s selections whether or not you’re getting lei’d…ahem…or laid. See what we did there?

Add ingredients to a cocktail shaker with ice. Shake and strain into a tall glass. Garnish with pineapple.