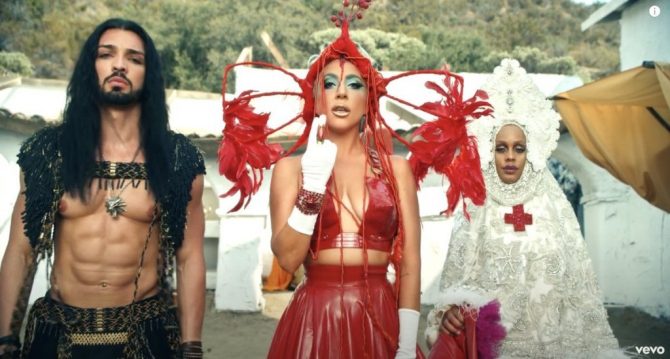 Oscar-winner, badass and icon Lady Gaga has her fans in a frenzy with the release of her new short film, an extended video for the song “911.”

“911” marks the fourth single off Gaga’s newest album, Chromatica. The song sees Gaga returning to her roots in dance/electronica, and confronts the singer’s struggles with mental health. In an interview with Apple Music, Gaga confirmed that the antipsychotic drug olanzapine–a drug which she is prescribed–inspired the tune.

The new music video, directed by acclaimed filmmaker Tarsem Singh (The Cell), recalls Alejandro Jodorowsky’s cult film El Topo. It finds Gaga lounging in desert dunes and following a mysterious figure in black to a Spanish villa. From there, things get typically weird, as the song’s long musical interlude gives way to the lyrical portion. Dancers in elaborate, colorful costumes fill the villa’s plaza as Gaga sings about the voices in her head. The film culminates in Gaga stabbing herself in the chest, and waking up to see paramedics standing over her: she’s been in a biking accident.

In other words, the “911” video fits well with Gaga’s signature mixture of style, performance art and general weirdness.

Crank the volume, and have a look. We have a feeling you’ll be seeing the video quite a bit in the near future.