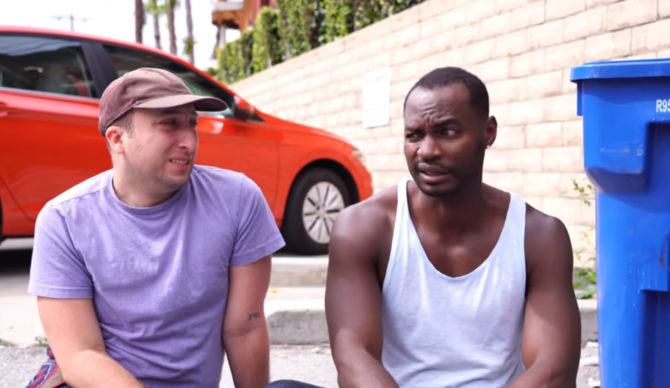 At least he had one.

Comedian Michael Henry dropped his latest video this week, a combination ode and lament to COVID-19 friends with benefits.

Titled My Friend With Benefits Dumped Me, the video finds Michael along with his friends Pete and Michael relaxing outside a dumpster. Michael and Michael moan just thinking about the hot love they’ll be getting with their partners, while Pete wears a black veil, in mourning.

Michael Henry brags about his latest FWB, who imitates the singer Seal. Michael Lucid takes pride in hooking up with the sesame seed sprinkler from a Jack in the Box.

Related: Michael Henry has thoughts on mastering the art of YouTube, plus gay demons!

Come to find out, Pete’s friend with benefits–a mechanic, which Pete sees every week after pouring kitty litter in a gas tank–has dumped him. In fact, he’s disappeared altogether.

Luckily, just as Michael, Michael & Donald are about to embark on a FWB couples retreat, Pete gets a message from his mechanic. As it turns out, he actually…

Well, it’s best experienced by watching. Have a look.