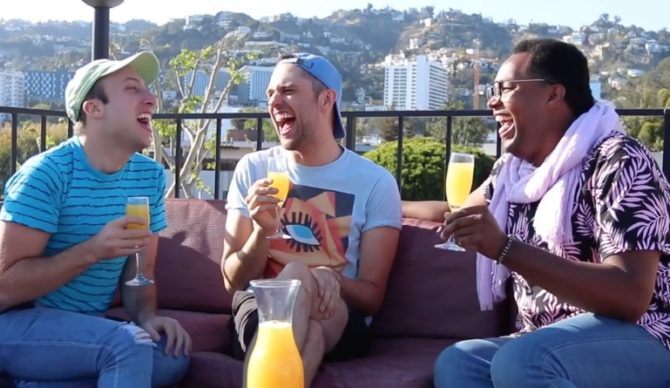 Michael Henry released a new YouTube video this week that tackles drinking in the gay community, and even if you don’t personally relate to it, chances are you know someone who would.

The lines between indulgence, overindulgence and addiction can get awfully fuzzy when it comes to alcohol, and not just because you’re so drunk your vision’s completely blurred.

Related: ‘Dangerous When Wet’ Author On Alcoholism, HIV And The Bond Between Gay Sons And Their Mothers

In what’s become his signature style, Henry takes an uncomfortable truth — various studies show LGBTQ people are twice as likely to struggle with substance abuse than straight people — and turns a serious conversation into something of a manic fever dream.

In one exchange, someone asks, “Should we all just blurt out the reasons we’ve intertwined our gay existence with alcohol?”

“Sure!” the other two excitedly agree.

“I don’t know how to have sex sober,” says one person.

Related: Five Ways To Reclaim Your Sex Life After Booze, Meth And Other Substances

“Nobody likes me when I’m not drinking,” says another.

The sketch is chock full of little truth bombs like these, which simultaneously made us shoot milk out our noses (we weren’t even drinking milk) while also feeling some heartache for everyone struggling with these difficult and dangerous realities.

Watch the video, which stars Henry, Chad Westbrook and Travis Cole, below:

Bonus — Here’s another great video from Henry that broaches another challenging topic: