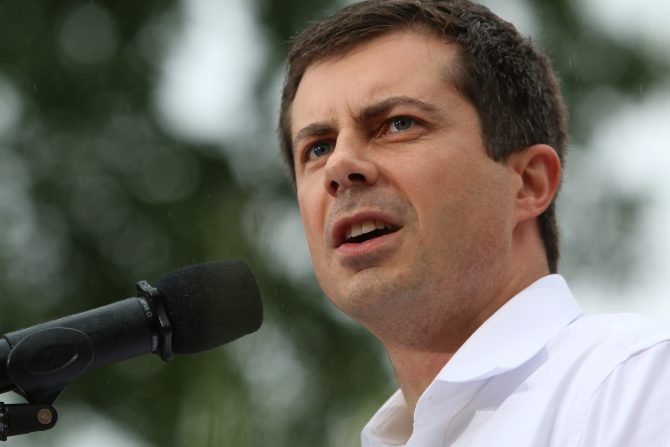 Proving once again to be a highly adept campaigner, Pete Buttigieg was put to the test when a MAGA heckler interrupted his stump speech for Biden at a Tampa, Florida rally on Wednesday.

And hey, Pete’s already proven to be a solid late night host, so at this point if the whole politics thing doesn’t work out for him, he probably has a decent shot at a comedy circuit.

The heckler got in front of Buttigieg’s podium, screaming, “Trump 2020. Say no to Sleepy Joe Biden!”

HAPPENING NOW// Just at Pete Buttigieg began his speech at Williams Park in Tampa, this man started yelling in front of him in support of President Trump ?@BN9? pic.twitter.com/v3oBPBfr8X

The man wouldn’t stop, prompting Buttigieg to assure his audience: “Don’t worry about it. We’re bigger than him.”

“Do you denounce white supremacy?” he finally asked, seeming to  receive a “yes.”

“Good!” Buttigieg responded. “Then we AGREED on something. That’s a beginning point. See if you can get your president to do the same thing.”

Master class on handling a heckler by @PeteButtigieg pic.twitter.com/MmTf3l8tWY

When Trump has a heckler he calls for his thugs… watch what Pete Buttigieg does. ? pic.twitter.com/qss1qtXxWH