What could possibly be more radical than a faerie? Especially when that faerie is part of a worldwide movement to elevate queer consciousness and liberation through spiritual exploration that was the whole message¬Ýof the city‚Äôs Summer of Love. Dating back decades, San¬ÝFrancisco has played¬Ýhome base to a life-changing movement known as the Radical Faeries, a¬Ýloosely-organized group of free spirits who prize creativity, freedom and spirituality.

Like the Sisters of Perpetual Indulgence, the Faeries emphasize¬Ýcommunity: they socialize, they date, they engage in¬Ýcharity for the neighbors around them. Over the years, they‚Äôve had a huge impact on San Francisco‚Äôs philosophy of¬Ýsexual liberation, but also on¬Ýthe city‚Äôs social scene. The Faeries are for everyone ‚Äî young, old, outcasts, drag, femme, nudists, non conformists, regular guys and the rest of us.

1. Faery Circles of the Haight 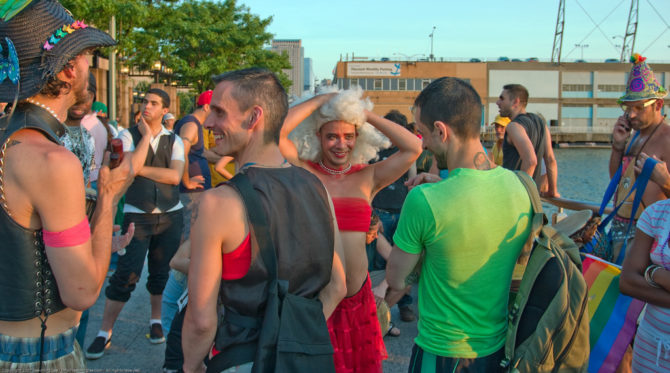 The movement traces its roots back to early adherents were activists such¬ÝHarry Hay and Mitch Walker, who set out to provide gay men with an alternative to what they saw as¬Ýmainstream gay culture: discos, pop culture, capitalism, consumerism and assimilation. Activist Arthur Evans established Faery Circles in his Haight Street apartment, offering a social gathering where gay men could celebrate Greek and Pagan rituals. 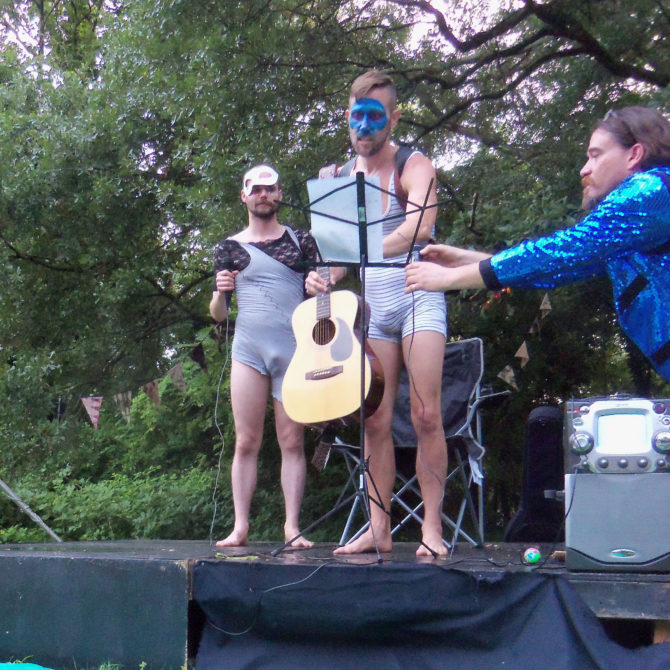 Harry Hay, a socialist who had previously helped run the Gay Liberation Front, joined with UCLA student Mitch Walker, who was working on a sex guide for gay men.

Together with other activists, these organizers put together an initial gathering that they called the Spiritual Conference for Radical Faeries, located in Arizona in late 1979. There was considerable resistance to calling their work a ‚Äúmovement,‚Äù since they wanted more a decentralized¬Ýway of life; and that approach seemed to resonate. Despite the remote location, over 200 men showed up for the retreat, and heard speeches about resisting the urge to assimilate with non-gay people.¬ÝPrograms included practical skills such as massage and nutrition, and imaginary beliefs like healing energy, ideas that soon would catch hold in mainstream culture as well.¬ÝThere was also a workshop on English country dancing¬Ýand sex. 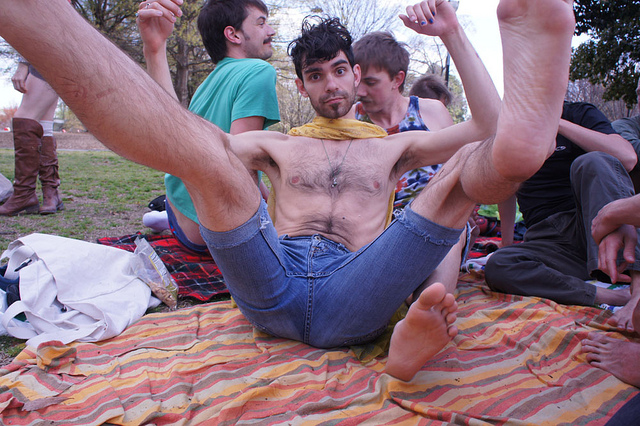 That successful initial gathering allowed the loosely defined group¬Ýto create chapters around the country. Though many of the organizers lived in Las Angeles, including Hay, another group formed the San Francisco Faerie Circle. They formed a nonprofit called NOMENUS and established a gathering place in what was then a more Napa before it established itself as a wine destination. Later they acquired a farm in Oregon to continue the spread of the movement. There are now official gatherings across the United States, Canada, Australia, the UK, Italy and France.

Many of the participants in that early gathering returned to San Francisco eager to disrupt the dominant¬Ýculture and assert queer power. The result: a new group known as Sisters of Perpetual Indulgence. Now a worldwide phenomenon, at the time the Sisters were an unusual group of men in nun outfits and makeup. But they took the values of the Faeries (self-expression, empowerment, spirituality) and translated them into radical queer performance.

They started simple: a fundraiser, a bingo¬Ýnight, and a Salsa dance. Many in the¬ÝCastro, which at the time was still a¬Ýwhite working class enclave, were mystified. But San Francisco on the way to becoming the¬Ýtolerant city it is today, the Sisters soon proved that they were an invaluable part of the community with charitable work and community support.

5. A Home for the Sex-Positive in the Mission

The 14th Street Faery House is a colorful ode to love, and a place to gather and build community during the worst days of the HIV epidemic. It remains a refuge, providing housing to disadvantaged San Franciscans in¬Ýthe vibrant but expensive ‚Äòhood.

The house is a safe place for rejecting¬Ýthe trappings of heterosexuality. The group is therefore sometimes¬Ýregarded as outcasts even among other LGBTQ. ‚ÄúBecause of its indigenous, gay-centered nature, the Radical Faerie movement pioneers a new seriousness about gayness, its depth and potential, thereby heralding a new stage in the meaning of Gay Liberation,‚Äù Mitch Walker has written, reflecting on nearly two decades¬Ýof the movement.

The San Francisco group emphasizes DIY events, sex parties as fundraisers, and creative support¬Ýfor other members. Those projects include Faetopia, a 2012 screening series, and the Faerie Freedom Village, a massive annual gathering.

In San Francisco, the faeries tend to cluster near the Mission, where the nicknamed Feyboy Mansion is located. Their look tends to be flamboyant, a bit closer to Burning Man-style than other chapters might be. And questioning gender is to be expected.

Last year in¬ÝSan Francisco, the¬Ýfaeries created a ‚ÄúFaerie Freedom Village‚Äù during Pride in the heart of United Nations¬ÝPlaza, adjacent to the main Pride rally.¬ÝDecorated like an elaborate Burning Man camp, it was a commercial-free island of¬Ýspiritual pleasure where the economy is based purely on gifts.

‚ÄúWe pulled ugly green frog skin of heterosexual conformity over us, and that‚Äôs how we got through school with a full set of teeth,‚Äù Harry Hay once said. ‚ÄúWe know how to live through their eyes. We can always play their games, but are we denying ourselves by doing this? If you‚Äôre going to carry the skin of conformity over you, you are going to suppress the beautiful prince or princess within you.‚Äù 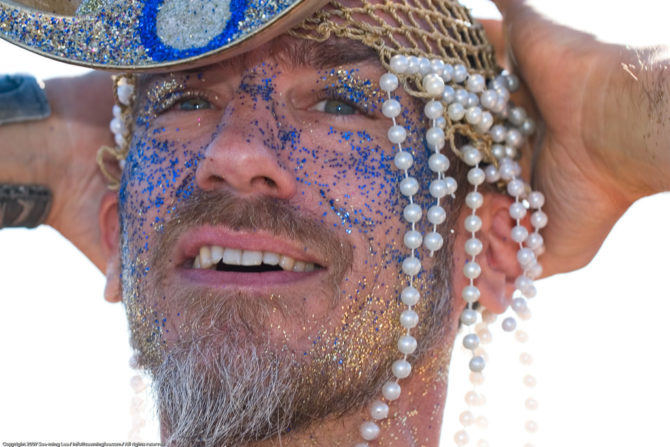 Many¬Ýradical faerie settlements are far from cities, hidden away in forests or farms. They are anti-materialist, spiritual and devoted to justice. But those who live in urban settings¬Ýare able to transform their dwellings to something more natural, with pocket¬Ýgardens, green living roofs, and¬Ýeven chicken coops.

In 2014, a member of San Francisco‚Äôs radical faerie community was beaten to death. Blindsided by the tragedy, his friends and chosen family sprung into action to support each other: a circle of prayer, silence, flowers and incense¬Ýbrought¬Ýthe community together to heal in Dolores Park. At the same time, faeries in Michigan, where the victim grew up, held a sister-vigil in his memory. It is at times of greatest tragedy that the strength of the Radical Faerie community is revealed.

There‚Äôs seemingly no end to the events and parties and prayers and classes offered by Faeries around the Bay, but one of the most memorable might be Xrysalis, a retreat for queer people of color in Mendocino County, 100 miles north.¬ÝHarkening back to the¬Ýearly faerie gatherings, the event invites participants to get naked dive into mud and clay, and cover their bodies in nature. Participants return to the city¬Ýfeeling affirmed, fulfilled and connected to nature.

We use cookies on our website to give you the most relevant experience by remembering your preferences and repeat visits. By clicking ‚ÄúAccept‚Äù, you consent to the use of ALL the cookies.
Cookie SettingsAccept
Manage consent