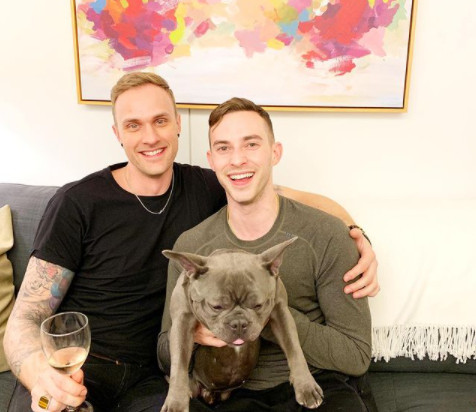 Adam Rippon opened up about how he and his fiance Jussi-Pekka Kajaala got engaged during the seemingly never-ending pandemic.

In short, it was not your typical proposal.

“I’m kinda white trash and that was the theme of the entire engagement,” Adam told hosts Zach Stafford and Jo Ling Kent on Clubhouse.

Covid interrupted the courtship. “I didn’t get a chance to see him through 2020 because of the pandemic. But in November, Finland changed its restrictions to get into the country and I was there for two-and-a-half months.”

Getting engaged “felt like a very natural next step.”

Once in Finland the couple “decided we were going to get rings together and would propose at the same time to have the experience.” JP is a hunky 6’4 so Adam said, “I’m not getting on one knee and if he does we are at eye level.”

Rippon recalled how he met Kajaala on Tinder, and how the pair dated for three years before getting serious about setting a big day. Rippon also revealed that the couple also bought their rings together as a sort of joint proposal.

The original idea was to have matching simple and plain gold rings. “’The presidential ring,’ I call it because every politician has a simple gold ring … But then we bought our own rings to surprise each other.”

The couple were in the middle of binging The Crown and thought they would do it in between episodes but then decided it would be too sad.

As for the big day itself? Don’t expect an invitation.

“At first I thought to drive through Vegas,” Rippon said. “But I think we will end up doing courthouse.”

With Kajaala’s family in Finland and Rippon’s living in the U.S., it seemed unfair to demand one family leave the continent for another. “I already make every day about myself!” he added.

As for living arrangements, Kajaala plans to join Rippon in Los Angeles by the end of the year.