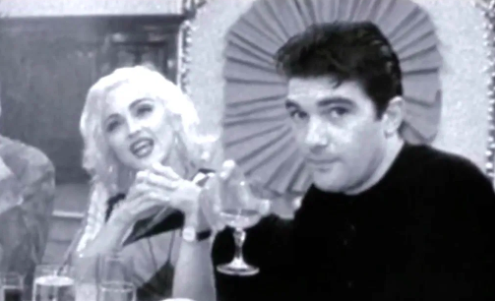 Iconic Spanish film director Pedro Almodóvar has been spending his time in quarantine reflecting on his life and career in a series of essays, one of which was recently published by Indiewire.

In it, the Academy Award-winning filmmaker spills some major tea about Madonna and that time he and Antonio Banderas were tricked into appearing in her 1991 documentary Truth or Dare.

“I went out with her the days she spent in Madrid,” he recalls. “I organized a big flamenco party for her… She had made it very clear to me that, aside from myself, she was only interested in meeting one other guest, Antonio Banderas.”

Almodóvar promised Madonna that Banderas would be in attendance, “I promised her that Antonio would be there, but I didn’t tell her that I couldn’t invite him without his then-wife, Ana Leza, a huge fan of the singer.”

He goes on to explain that Madonna insisted on making the seating chart, and that she placed herself right between Almodóvar and Banderas at the main table. Ana Leza, however, was relegated to “the table furthest away.”

“Madonna did not pay attention to anybody else,” Almodóvar continues.“Ana dared to get close to our table and told the divine blonde sarcastically, ‘I see you like my husband, it doesn’t surprise me, all women like him, but I don’t mind because I am very modern.’ To which Madonna replied: ‘Get lost.’”

Related: Madonna’s latest tour may have done more harm than good to her career

Almodóvar, who insists he’s not out to settle any scores, says that Madonna never explained why she brought a film crew to his party, other than to say it was “for a keepsake.”

“If it had been the other way round (me filming Madonna and her team and making a film with all that material which I would then premiere around the world) I would have taken such a hit in the form of a lawsuit I’d still be recovering from it.”

“Madonna treated us like simpletons and I had to say it one day,” Almodóvar continues. “She didn’t ask for permission to use our images, and she even dubbed me, because my English mustn’t have been that good.”

Relive in the moment below.