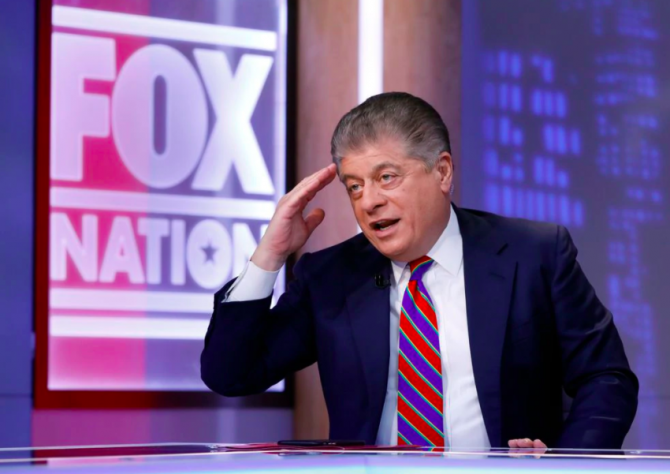 Another day, another Fox News personality fired for sexual misconduct.

The conservative propaganda network has finally decided to drop its top legal analyst Andrew Napolitano after yet another man has filed a sexual harassment lawsuit against him.

Related: A bunch of Fox News anchors have just been accused of rape and sexual harassment in damning lawsuit

27-year-old Fawcett claims Napolitano, who served as a  New Jersey Superior Court judge from 1987 to 1995 before joining Fox News in 1998, got “awkwardly close” to him during an interaction in 2019.

During the encounter, Fawcett says Napolitano began stroking his arm before inviting him to his horse farm in New Jersey and “suggestively” saying he could get his hands “really dirty.”

The lawsuit also alleges that network execs knew about Napolitano’s conduct but refused to do anything about it. In fact, Fawcett says “they immediately started laughing” because “it was common knowledge that Judge Napolitano sexually harassed young men at Fox News.”

Fox News denies this, but it did confirm that Napolitano has been let go from its roster.

“Upon first learning of John Fawcett’s allegations against Judge Andrew Napolitano, FOX News Media immediately investigated the claims and addressed the matter with both parties,” Fox said in a statement released on Monday. “The network and Judge Napolitano have since parted ways.”

“Fox News takes all allegations of misconduct seriously,” the company added, insisting that it is “committed to providing a safe, transparent, and collaborative workplace environment for all our employees.”

As for Napolitano, he hasn’t commented on the matter, but this isn’t the first time he’s been accused of sexual misconduct.

Last September, he was accused of “forcible sodomy” and other sex crimes by a man named Charles Corbishley, who appeared as a defendant in Napolitano’s court in the late 1980s.

That same month, he was also accused of sexually harassing a waiter named James Kruzelnick, who claimed Napolitano invited him back to his house after coming into the restaurant where he worked and coerced him into performing “bizarre” sex acts in his living room.

As defendant Napolitano entered the living room, Plaintiff observed that Napolitano’s pants were down, and his penis was fully erect and exposed. Plaintiff was truly shocked by Napolitano’s conduct, and didn’t know how to react. Before Plaintiff could say anything, Napolitano said “I am really into certain things” and “I want you to do something for me.”

Plaintiff was repelled by Napolitano’s request and had no interest in playing this bizarre “sex game.” But when Plaintiff told Napolitano that he did not want to spank him, Napolitano shouted at him: “Just f*cking do it!”