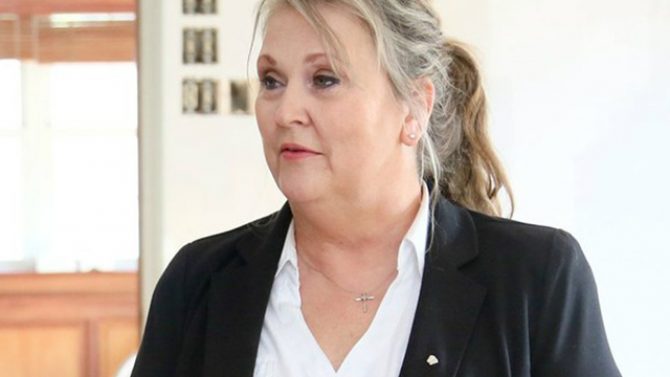 Ohio state Rep. Candice Keller made headlines last summer when she blamed a deadly mass shooting on drag queens. She made headlines again this past April when she lost her primary in a run for the Senate. And now, she’s making headlines yet again by announcing her revenge plot she and her husband have cooked up against the guy who beat her.

OK, so a little back story: In a since-deleted Facebook rant last August, Keller blamed a mass shooting that left nine people dead in Dayton, Ohio on the “breakdown of the traditional American family,” as well as “transgender, homosexual marriage, and drag queen advocates” and “the culture, which totally ignores the importance of God and the church.”

Despite calls from both parties to resign following her remarks, Keller refused, and instead announced she was running for Senate. But in April, Ohio voters picked her Republican challenger, Rep. George Lang, to represent their party in November’s election.

And Keller was pissed.

She spent all summer cooking up a revenge plot on Lang, who is a fellow Republican. Then this week, she announced her husband, Kent, will be running as a write-in candidate, in hopes of either beating Lang, or taking away enough votes from him so that he loses to his Democratic opponent, Kathy Wyenandt.

Either outcome is fine with her.

Keller says she and her husband, Kent Keller Sr., have been talking about the current corruption scandal that’s rocked the Statehouse, and about state Rep. George Lang (R-West Chester). Lang was acquitted on a perjury charge in 2011 after being accused of a kickback scheme involving a telecommunications firm.

“We don’t want another crook sitting in the Statehouse representing us, and so that being the situation here in Butler County, my husband has decided to run as a write-in candidate,” Keller says.

This is an interesting turn of events. This clown is running as a write in just so he can take votes away from Lang….

Posted by Ohioans Against Candice Keller on Monday, August 24, 2020

Lang says he doesn’t understand why the Kellers are digging up this decade-old dirt on him. Especially since, in the end, he was acquitted.

“I’ve never been convicted of a crime in my life,” he says, “and I don’t believe in feeding the monkeys.”

But taking down members of her own party isn’t all Keller’s been up to lately. She was recently criticized for going shopping at Walgreens without a mask and encouraging others to “be brave” and ditch their masks, too.

And when asked about coronavirus, she replied, “I understand COVID can be deadly or very dangerous for some people, but so are strawberries and so is shellfish.”

It’s very unlikely Kent Keller will win against either Lang or Wyenandt as a write-in candidate on November’s ballot.

But that’s not really the point, is it?