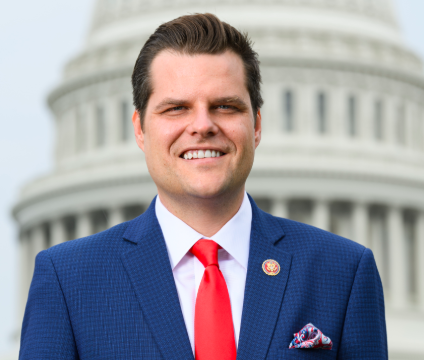 Last week, congressman Matt Gaetz of Florida made a spectacle at the nation’s capital when he wore a gas mask during a floor vote to mock the coronavirus hysteria. This week, he’s entering self-quarantine as he awaits test results to see if he may have contracted the virus.

Gaetz, who, in 2016, said he believes marriage should be between one man and one woman and who, in 2019, opposed giving trans people equal rights because he feared it would open the door for “potential bad actors” to “exploit the provisions,” came into prolonged contact with a CPAC attendee last month who later tested positive for the coronavirus.

Yesterday, Gaetz’s office announced on Twitter that the lawmaker has been tested for the virus and will be self-quarantined for a 14-day period as he awaits the results, writing: “Congressman Gaetz was informed today that he came into contact with a CPAC attendee 11 days ago who tested positive for COVID-19.”

Congressman Gaetz had expected COVID-19 to impact Congress, given the elevated frequency of travel and human contact, and demonstrated his concern last week on the House Floor.https://t.co/zb6P9bmHK7

Gaetz, who has racked up almost two dozen speeding tickets so far in his lifetime and was once arrested for drunk driving, also flew on Air Force One with Donald Trump prior to learning he had been exposed to the virus.

The White House says Trump isn’t worried and hasn’t been tested for the virus, despite having come into close contact with several lawmakers who are now self-quarantined, because he is in “excellent health.”

(For the record: The incubation period for COVID-19 is anywhere between two to 14 days, which means a person can feel totally healthy and still have the virus.)

Vanity Fair adds: “Stories about Trump’s coronavirus fears have spread through the White House. Last week Trump told aides he’s afraid journalists will try to purposefully contract coronavirus to give it to him on Air Force One, a person close to the administration told me. The source also said Trump has asked the Secret Service to set up a screening program and bar anyone who has a cough from the White House grounds. ‘He’s definitely melting down over this,’ the source said.”

Related: Antigay lawmaker who ripped Hunter Biden for substance abuse… once got a DUI