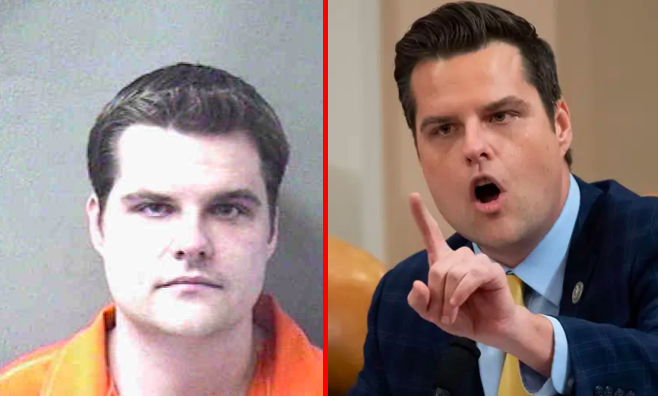 Rep. Matt Gaetz of Florida decided to use yesterday’s impeachment hearing to attack Hunter Biden’s past substance abuse problems… because that’s how Republicans like do things these days, shaming private citizens for personal matters in the most public of forums so it can be documented for all of history.

“I don’t want to make light of anybody’s substance abuse issues,” Gaetz snarled during yesterday’s hearing, “but it’s a little hard to believe that Burisma hired Hunter Biden to resolve their international disputes when he could not resolve his own dispute with Hertz rental car over leaving cocaine and a crack pipe in the car.”

Rep. Matt Gaetz: "It's a little hard to believe that Burisma hired hunter Biden to resolve their international disputes when he could not resolve his own dispute with Hertz Rental Car over leaving cocaine and a crack pipe in the car." pic.twitter.com/RhzrdJ1YWT

But Gaetz, who, in 2016, said he still opposed same-sex marriage and believed marriage should be between one man and one woman, has his own dark history when it comes to substance abuse.

Before being elected to Congress, he was arrested for driving under the influence in 2008… going almost 50 MPH in a 35 zone… in a car registered to his father… who was a state senator at the time.

Back in 2008, Gaetz was pulled over driving back from an Okalossa Island nightclub called Swamp after an officer clocked him going 48 in a 35 mile per hour zone. According to the officer, Gaetz, then 26, was driving a BMW SUV registered to his state senator father and fumbled for his license and registration, had bloodshot and watery eyes, and swayed and staggered while getting out of the car. Smelling alcohol, the officer asked Gaetz if he had been drinking, to which Gaetz said no, before admitting minutes later that he had, claiming it was only two beers. The officer reportedly twice conducted an eye test, which Gaetz failed. Gaetz refused field sobriety tests and a breath test and was arrested. Despite the fact that Florida law dictates his license should have been revoked for at least a year for refusing the breath test, Gaetz somehow got to keep his. Ultimately the charges were dismissed, and Gaetz later said that “I made bad decisions that resulted in an arrest, and that is sort of something that we all live with.”

Matt Gaetz, a known drunk and collector of DUI’S has the audacity to bring up Hunter Biden.
Pot calling kettle black.
Throwing rocks in a glass house.
Or just being the fucking drunk that he is. pic.twitter.com/YlApwyuXA2

Rep. Hank Johnson of Georgia quickly called Gaetz out for his hypocrisy yesterday, saying, “I would say the pot calling the kettle black is not something we should do. I don’t know — I don’t know what members, if any, have had problems with substance abuse, been busted for DUI, I don’t know. But if I did, I wouldn’t raise it against anyone on this committee. I don’t think it’s proper. And, you know, I think we have to get back down to what is most important here.”

Gaetz didn’t respond to Johnson, but he did tell CNN later, “I’m focused on the president…. I don’t think Americans are hanging on a traffic incident I had a decade ago.”