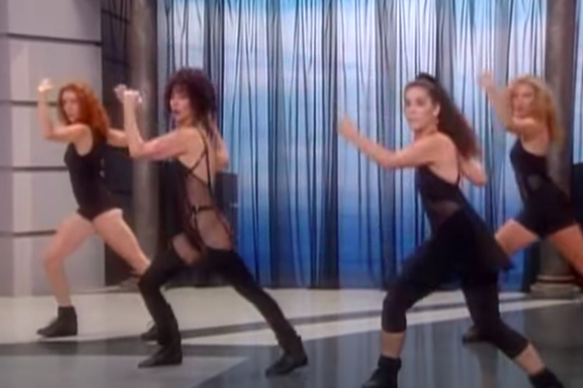 As quarantine lingers on and gyms remained closed, a lot of people are growing bored with their home workout routines. Thankfully, Cher‘s here to help. A fitness video she recorded in the early ’90s has begun recirculating online and it’s sure to get your endorphins flowing.

A little backstory: In 1991 and 1992, Cher’s music career was in a bit of a slump and she wasn’t being offered any good movie roles. Strapped for cash, she borrowed a page from Jane Fonda’s playbook and released a series of fitness videos called CherFitness in partnership with The NutraSweet Company.

According to the press release, the videos were based on the singer’s own personal fitness routine, which she did every day back then to stay in shape. One of the workouts included a step program called “Hot Dance,” led by former-athlete-turned-Cher’s-personal-trainer Keli Roberts.

In the video, Cher demonstrates the 40-minute routine while dressed in the sheer black leotard she wore in her If I Could Turns Back Time video, teaching viewers how to tone and stretch every muscle in their body while stepping along to the beat.

Watch Cher sweat it out below.

The video reminds of that time in the early ’80s when Cher, during another recession in a career, did a commercial for a health club in Chicago. Ah, memories!