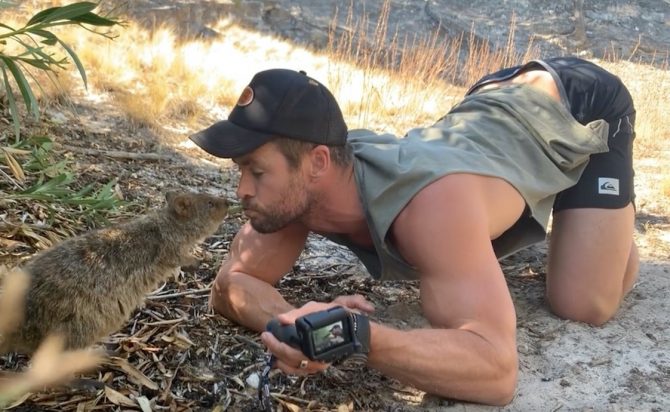 Not since Troye Sivan dropped “Bloom” has there been this much chatter about the art of bottoming.

In fact, there’s been a disproportionate fuss over big dick energy (BDE) for a while now, so it’s about time some power bottoming energy (PBE) took center stage.

Related: Tom Ford: All Straight Men Should Try Bottoming At Least Once

We did not, however, expect the moment to involve Thor star Chris Hemsworth and a quokka, a small marsupial native to Australia.

But this is the future we got, so…

While enjoying the natural beauty of Rottnest Island off the coast of Perth, Australia, Hemsworth befriended one of the resident quokkas.

And the way he tells the story, you’d think he was hired to play a quokka in his next film and preparing to go full Daniel Day-Lewis method acting.

Related: Is it time for the labels “top,” “bottom,” and “vers” to disappear forever?

“Spent 3 weeks crawling around the dirt,” the Avengers star wrote, “studying the Quokkas movements, mimicking their language and eventually gained their trust and was accepted as one of them, I now go by the name Quokkachris.”

Spent 3 weeks crawling around the dirt, studying the Quokkas movements, mimicking their language and eventually gained their trust and was accepted as one of them, I now go by the name Quokkachris #rottnestislandwa @australia @rottnestislandwa

But that’s all just set-up to the real story, which came after Hemsworth’s wife, Elsa Pataky, shared her view of the encounter:

Gay Twitter had a lot to say about Hemsworth’s instantly-recognizable posture:

Chris Hemsworth might know a thing or two about bottoming tbh pic.twitter.com/XZTihdqDvg

Chris Hemsworth might not be gay, but he's definitely a bottom.pic.twitter.com/F13TTH9xow

It's meeting the man of your dreams…and then meeting his beautiful wife. pic.twitter.com/vdiENzVqLI

Wholesome Chris Hemsworth posting this and later checking why ppl are tweeting about him and seeing why. pic.twitter.com/GbHatvGbHQ