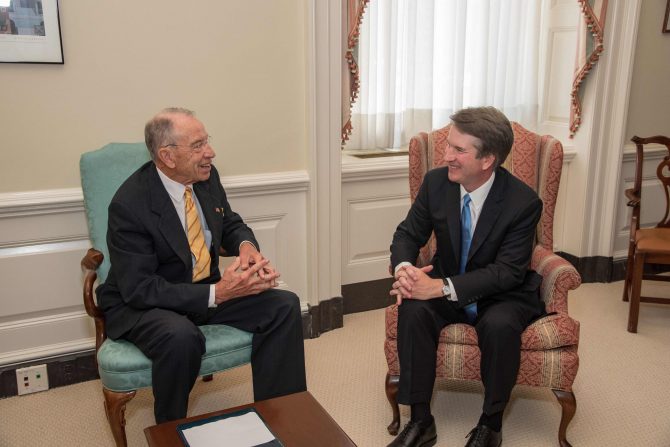 Sen. Chuck Grassley posted a weird tweet at 4:00 this morning announcing that, at 88-years-old, he’s running for reelection. Again.

“It’s 4 a.m. in Iowa so I’m running,” the octogenarian, who is currently in his seventh term as a U.S. Senator, tweeted. “I do that 6 days a week. Before I start the day I want you to know what Barbara and I have decided. I’m running for re-election—a lot more to do, for Iowa. We ask and will work for your support. Will you join us?”

The tweet was accompanied by GIF of a man running outside in the predawn hours of the morning.

It’s 4 a.m. in Iowa so I’m running. I do that 6 days a week. Before I start the day I want you to know what Barbara and I have decided.

I’m running for re-election—a lot more to do, for Iowa. We ask and will work for your support. Will you join us? #GrassleyRuns #GrassleyWorks pic.twitter.com/cwv8yu9wkx

We think it’s great that, at nearly 90 years old, Chuck Grassley still has the energy and ability to wake up at 4 a.m. six days a week and go for a run. Hats off, Senator!

Less great, of course, is his decades-long record of supporting anti-LGBTQ legislation, including a constitutional ban on same-sex marriage, voting against expanding hate crime protections to include LGBTQ people, supporting Don’t Ask Don’t Tell, voting to legalize job discrimination based on sexual orientation, and the list goes on and on and on.

And now, the responses to Grassley’s announcement…

You have got to be kidding me

“Hi, my name is Chuck Grassley and I am a perfect example why we need term limits in our government.”

What time do you need to get to bed to get up at 4 am?

Iowa should ask itself “what has he done for me?”. Anything? One thing? Can anyone name one thing he has done for Iowa or the United States??

How can an 88yr old man reasonably and honestly make a 6yr commitment?

Sir, with all do respect, at 89 years old I believe it’s time for you to graciously retire and allow the younger generations to step up to the plate.

But your party said Biden was too old. I’m confused.

Your time has long past. You’ve had more than enough chances to do some good for America and you have not. Your legacy is one of arcane thinking and poor stewardship of our great land. Your ego knows no limits.

Due respect, sir, but it’s time to pass the baton. We are in a different world now that requires new voices and leaders. You’ve served. This is a representative government that is not designed for a lifetime tenure. Do the right thing. Retire.

Go back to sleep.

Keep running … right out of Congress.