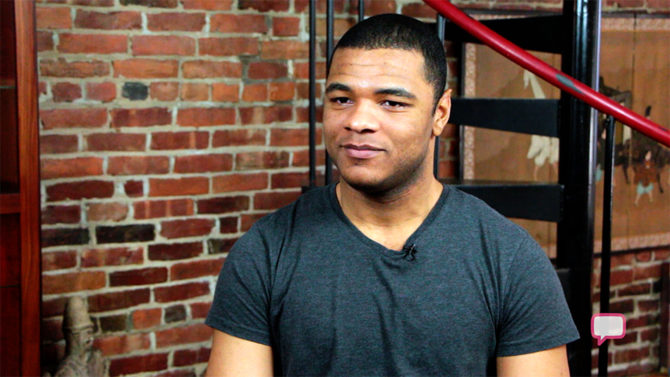 “I grew up in the Pentecostal tradition of Christianity,” Johnson says in a new interview with I’m From Driftwood. “After a long, hard childhood of growing up in that particular denomination, I went off to a Christian university called Liberty University.”

“I was not allowed to have any kind of sexual activity outside of a marriage,” he says, “which included solo sex.”

It was while he was in that group that Johnson realized he was attracted to men. He tried his best to keep the feelings he was experiencing a secret, but people still seemed to notice.

“I believe there were certain guys who were becoming suspicious of my same-sex attraction,” he recalls. “So I was reported to the RAs, as well as avoided by a lot of the guys.”

Ultimately, being ostracized by his peers forced Johnson to drop out of Liberty University and attend a different college. But he still struggled with accepting his same-sex attraction.

“So one night, when I was having a conversation with this friend, I told him about a few of the struggles I was having, one of them, of course, you know, the fact that I’m attracted to men and not women. So he recommended that I go visit this exorcist.”

What happened next was about as horrifying as you might imagine. Late one evening, Johnson’s friend brought him to a church on the other side of town. After the service began, he says, “the sanctuary began to clear out and I was at the altar.”

I went over to the exorcist and we had a brief discussion about what I was going through before exorcism began. He also asked me if I struggling with homosexuality. I told him yes. He first started by placing some oil on my head in the form of a cross. So both him and his wife began to pray over me and they asked me to breathe in and breathe out at different times while they were trying to, quote, cast demons out of me, unquote. And so, not only were they speaking in English but they were also praying in tongues.

After the exorcism, Johnson says nothing about him changed. He was still gay. He was also sufficiently creeped out.

After giving it some more thought, Johnson realized that “being gay is perfectly natural.” It’s bizarre, late-night rituals in empty churches on far sides of town that should be feared.

Today, he says he’s proud to be an openly gay man.

“We’re all made this way for a reason,” he says. “And if being gay is so bad, why are we so cute, and why are we just so amazing in life?”

Hear him share his powerful story in the video below.