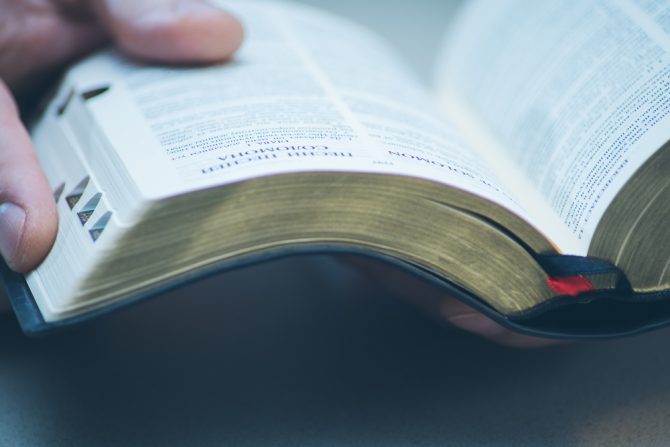 Or so I was told throughout my childhood, when going to church was a ritual my family completed several times every week. But even having spent years logging countless hours sitting on those hard, uncomfortable pews listening to interminable sermons about the holy men who wrote The Bible thousands of years ago, I find it difficult to believe they could have foreseen days like this, a post-Stonewall world where LGBTQ people have fought for and won many of the same rights as everyone else.

Did God, as some holy rollers would like us to believe, actually think it necessary to condemn homosexuality because it was such a threat in the B.C. era? Did he go and tell it to Moses on the mountain, or plant the seed in Jesus’s ear. It’s not like there were same-sex couples and gay-rights activists showing out on the streets of Nazareth.

But then, I’ve never read The Bible in its entirety. And I suspect neither have most of the people who insist on using it to support their homophobia. When folks have an agenda, though, pretty much any sentence can be spun to further their cause.

Which brings us to Seyi Omooba, an actress who was fired from a UK stage production of The Color Purple after she refused to apologize for a homophobic Facebook post she wrote in 2014. Now, like the owner of a Colorado bakery who took his refusal to make a cake for a gay wedding all the way to the Supreme Court, Omooba is claiming religious discrimination.

First, let’s consider the post that cost Omooba her gig. In it, she wrote, “Some Christians have completely misconceived the issue of Homosexuality, they have begun to twist the word of God. It is clearly evident in 1 Corinthians 6:9–11 what the bible says on this matter. I do not believe you can be born gay, and I do not believe homosexuality is right, though the law of this land has made it legal doesn’t mean that it’s right.”

For those unfamiliar with the specifics of 1 Corinthians 6:9, as I was before I looked it up, here is what it has to say: “Or do you not know that wrongdoers will not inherit the kingdom of God? Do not be deceived: Neither the sexually immoral nor idolaters nor adulterers nor men who have sex with men.” As 1 Corinthians is attributed to Paul the Apostle, that wasn’t actually a direct decree from God. They were the alleged words of a man who claimed to be His representative.

Corinthians, by the way, is the same book of the New Testament that forbids women from speaking in church: “If there is anything they desire to know, let them ask their husbands at home.” Had Paul been sage enough to foresee the rise of social media, I wonder what he would have had to say about female actors who write about the Word of God on Facebook.

The problem with using the Bible to support homophobia is that the source material — at least the King James version — isn’t 100 percent dependable. Many of the points in the original text, which was written in various ancient languages, including Hebrew and Latin, were likely lost in translation. And in any form, the good book is riddled with inconsistencies, contradictions, and impossibilities, beginning with one heterosexual couple, Adam and Eve, populating the entire planet.

Should we revert to the supposed mores of a time in which a vengeful, wrathful, and jealous God practically wiped out the human race by making it rain for 40 days and 40 nights and turned people into pillars of salt for daring to look back at a city He had destroyed. I’m not willing to change the way I love in order to comply with what Paul, a mere mortal who lived thousands of years ago, claimed was the will of that version of God.

Of course, if you gotta have faith, that’s your prerogative. People are free to believe what they want to believe, and they’re free to write about it on Facebook. I don’t think their misguided points of view should cost them their livelihoods. That said, Omooba wasn’t just fired from a random job. It was a part in a musical adaptation of a novel written by an LGBTQ author. If she is as dedicated to her religious convictions as she claims to be, why did she not have a problem earning a living through the work of Alice Walker, a woman whom she would just as soon condemn to hell for living a sinful life?

It wasn’t a random job, nor was it a random part. Omooba was dismissed from the lead role of Celie, who is involved in a same-sex relationship during the course of The Color Purple’s story. (It’s the part that earned Whoopi Goldberg a Best Actress Oscar nomination in 1986.) If she’s going to claim religious discrimination after being sacked, where was her dedication to her religion when she accepted the job? Can she use her religious convictions to back her up now when they didn’t seem to matter when she was pursuing the job?

Having grown up in a strict, religious environment (affiliation: the Pentecostal Christian denomination Church of God), I’ve been dealing with people like Omooba all of my life. Sometimes they’ve been folks in my own clan (thankfully, none in my immediate family). They claim to be guided by love, but all I’ve seen in their eyes when they see me is hate. If looks could kill, I’d be a pillar of salt, just like the doomed wife of Lot. What would the God that Paul the Apostle claimed to have such a strong connection to think of that?

Omooba, if you’re reading this (and she wouldn’t be the first homophobe to spend way too much time on an LGBTQ website), don’t answer that. She probably thinks He’d be cheering them on.

For all her protestations of religious discrimination, at least she gets to live. Thanks, in part, to people who think just like her and a number of holy rollers I’ve had to quietly dismiss from my life, many in the LGBTQ community aren’t so fortunate.