Film festivals attract all types of filmmakers from the established to the up-and-coming. Lara Gallagher falls into the latter category. Having directed several well-regarded short films, she’s come to the Tribeca Film Festival with hopes of raising her profile, courtesy of her first feature film Clementine. Born in Pennsylvania, she studied at Columbia University before moving to Portland. Clementine marks her first major bid at theatrical storytelling.

The movie follows Karen (Otmara Marerro, of TV’s StartUp) a young woman recovering from her break-up with an older girlfriend, known only as D. (Sonya Walger, Penny on Lost). Locked in a bitter fight over who gets to keep the former couple’s dog, Karen retreats to D.’s rural lake house. There, she encounters a snoopy, if hunky, groundskeeper (Will Brittain of The Colony) and a seductive younger woman named Lana (Sydney Sweeney of The Handmaid’s Tale). As sexual tensions rise between she and Lana, Karen finds herself drawn into a web of sex, deceit and crime.

We caught up with Lara Gallagher at Tribeca Clementine’s to talk about the ins and outs of making a queer thriller.

So this is your first feature. The piece has something of a noirish feeling. There’s a femme fatale, the blurring of morality, a loner protagonist running from her past who makes some very questionable choices. What was your inspiration?

It really came from a lot of different places. I love coming-of-age stories. That’s what a lot of what my work has been up to this point. Also, a lot of my work has been personal stories, semi-autobiographical stories. With this one, I don’t know, I wanted to take personal themes and themes I’m just interested in general and push myself a bit into a genre. I am a sucker for 90s thrillers, and so that is really what I love to watch or would never turn off, paired with my more art-house sensibility.

In terms of specific references, Persona was a big one for me, the Ingmar Bergman film. The relationship between those women and the storytelling of the most intimate moment was something that I really wanted, especially dealing with a lesbian story. I wanted that moment to be the most pivotal moment rather than anything sexual. I love Lucrecia Martel (Argentine director of The Headless Girl). I was watching a lot of her films shot-by-shot. She’s such a master. Her camera is always in the right place, not calling attention to itself. I was really aiming for that: to let the performances drive the whole thing. The simple drama of looking is really what I was into and wanted to ride-on.

There are times it feels very voyeuristic like we’re a fly on the wall.

One of the biggest themes in this film is a sort of generational disconnect. Karen has her heart broken by an older woman. She falls for Lana who is much younger and has trouble assessing her character. There’s almost an existential dread to that sentiment. Is Karen attracted to women that she can’t relate to, or do you think different generations just can’t relate to one another?

I think that’s really interesting. I definitely think they can relate to each other, but I think it’s really about the impact that you have on someone is totally different depending on who they are and their level of experience. I think Karen, what she gets from Lana, really is closure with D. because she finally understands what it is like to have doting eyes on you and to be a teacher in that circumstance. That was kind of my feeling too. A lot of the emotions in this story are driven by a breakup that I had with an older, more successful woman. Writing and directing it, getting to the age that she was when we were dating is just really illuminating. Coming to terms with what she was doing with me in the first place. Getting to that age, having students, or just fully becoming the “older person” inadvertently when you still feel too young or too old in different rooms. I think it’s really about that. You can’t help but take from people, and you’re giving out things too. You can try and stop yourself, but that’s really just how it goes.

That also relates to the best line in the film: “You’re old when you realize you’ll never get what you want.” Is that really true?

I do. I think about old ladies. I love them. When I see a stylish grandma doing it up, nothing warms my heart more.

There’s something about that young spirit, and how do you keep that? How to do what you love, or make a career sustainable. I think it really is about that. When there’s that sense of defeat or there’s a feeling that you’re old or it’s too late for you—that’s true sadness. That’s being old, and it has nothing to do with age. I really hope people get that. When [one character calls another “old”] it’s not really about age, it’s about her knowing her and what kind of person she is. With women especially, it’s a touchy thing, and endlessly fascinating to me. 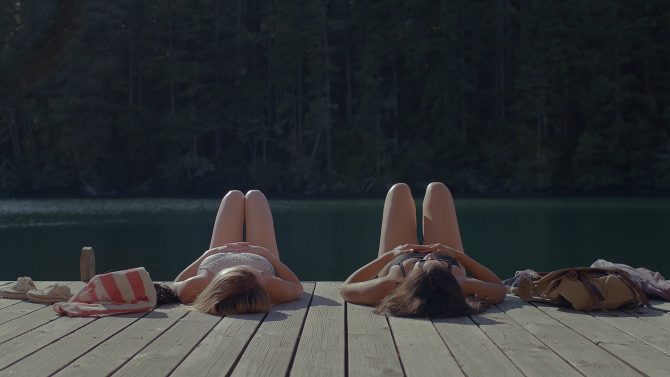 That scene plays with such despair. It’s so haunting.

I’m so glad it worked for you.

When you’re working on a scene like that, what’s the mood you keep on set? How do you direct your actors?

Definitely very relaxed. I’m really into writing, but I really like to improvise with them. Naturalism is what I’m after all the time. Getting them to loosen up is key. I also had an amazing AD, and he just kept it so light. I think that made a huge difference. Even if we were dealing with heavy material or heavy scenes, there was a lot of laughing. It definitely felt warm and welcoming. It was a tiny crew in a tiny house, so we had to make friends.

I love that you mention 90s thrillers. Lana could well grow up to be Sharon Stone in Basic Instinct: a total sociopath.

Yeah. I love Single White Female. I think it holds up so well, and people don’t talk about it enough. What those characters are doing—are they friends? Is it sexual? In the 90s, there were so many.

Do you think Lana will grow up to be a sociopath, or is she just a selfish, bored kid who knows how to manipulate people?

It’s funny. I had different ideas about the character before Sydney [Sweeney] came into it. I don’t think she’s a sociopath at all. I think she wants to get out. She’s an ambitious girl, and she’s looking for every avenue to do that. Every sign is that she’s special and she’s different. I’m from a super small town. I grew up on a like. I feel like I relate to that. Sydney is from Spokane, Washington. She related to that. You have to be a little bit ruthless to make sure that you get out. That’s where I was coming from with the character. But it could go a few different ways.

You’ve mentioned some of this is autobiographical. What kind of emotional release did you experience in reliving those feelings and putting them down on the page?

I wouldn’t say this is autobiographical. This is more taking those feelings from a break-up and wanting to do something with it. But, the thing is, when I was going through this break-up, it was my first really serious female relationship. So being dumped, I felt 15. I felt completely ripped open. I think almost being ashamed of those feelings kind of inspired it. I was a consenting adult. I was fully engaged by it. I think the same of getting dumped was something I tapped into.

Someone asked me today if I identify more with Lana or Karen. And the answer is both. I think that’s the catharsis of it.

You identify as a queer person. Do you feel obligated to include queer content in your work?

I wouldn’t say I feel like I have to include that in my work. I would just always want to. With this, it was definitely important to talk to all the actors to find out what it was about and figure out where they were with female relationships. If they have experience with that, if they don’t—really dig into all that. I just want to explore that. I think that’s the main thing with me and sexuality and female characters. I think there’s always a sense of not being old enough or being too old in the same way of not being gay enough or not being straight enough. Feeling in-between. That really is a great outsider perspective as a writer, and it’s a complicated thing. With this film, [being queer] is the status quo. I look forward to the time LGBTQ isn’t even a genre. It doesn’t indicate what a story will about.

It’s just an aspect of a character, and it’s part of life.

Clementine showed at the Tribeca Film Festival and is currently seeking distribution.

This is the official press release to announce that the amazing Will Brittain has joined the cast of #clementinemovie ??????? #willbrittain