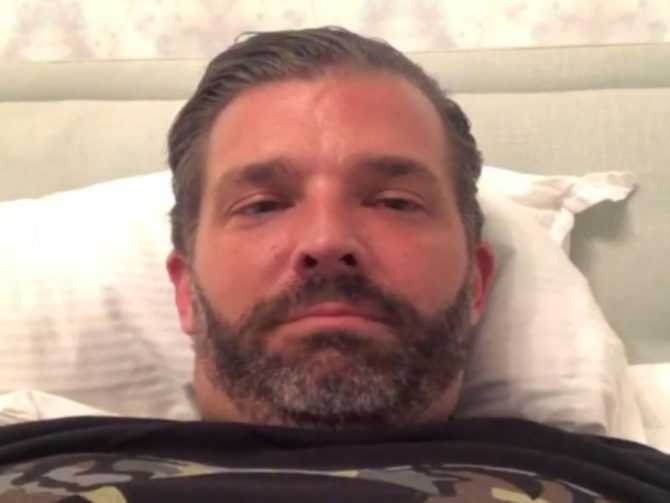 Donald Trump Jr. is hoping to make a little extra cash this holiday season, so he’s resorted to selling anti-Biden LGBTQ Pride merch on his official website. (Evidently, those $500 Cameo videos aren’t quite covering the cost of his expensive lifestyle.)

“Want a perfect surprise for your favorite lib relative this Thanksgiving?” he recently tweeted. “Check these out. Make a statement without saying a word.”

Want a perfect surprise for your favorite lib relative this Thanksgiving? Check these out. Make a statement without saying a word.??? https://t.co/BFLs6boLop pic.twitter.com/VD7kRdjQRI

Junior is peddling several different anti-Biden rainbow LGBTQ (“Let’s Get Biden To Quit”) cotton-poly blend t-shirts and tank tops. The shirts go for $27.99 and are allegedly “designed and printed in the USA,” which, to be clear, is different than being “made in the USA.”

Shortly after posting about the shirts on his Twitter page, Little Donnie was bombarded with comments from people trolling him with designs of their own.

Can I just order one of these instead? pic.twitter.com/yQ0VaoTmEv

And the new Insurrection Merch pic.twitter.com/n5ffwWc4Ol

These are my favorites, because they tell the truth. pic.twitter.com/vnFlTgKK60

I prefer this one pic.twitter.com/1E8nKL7sJX

Want a perfect surprise for your favorite Trumpkin this Thanksgiving? Check these out. Make a statement without saying a word https://t.co/2M6P2ekwh6 pic.twitter.com/vQmu9YBCQC

According to Don Jr.’s lesbian cousin Mary, “Donnie is a deeply unintelligent person. I’ve been asked who’s the stupidest one, and it’s him.”

In the past, Mary has also said that he has the uncanny ability to “out-racism and out-misogyny anybody.” It looks like he can “out-homophobia anybody”, too.