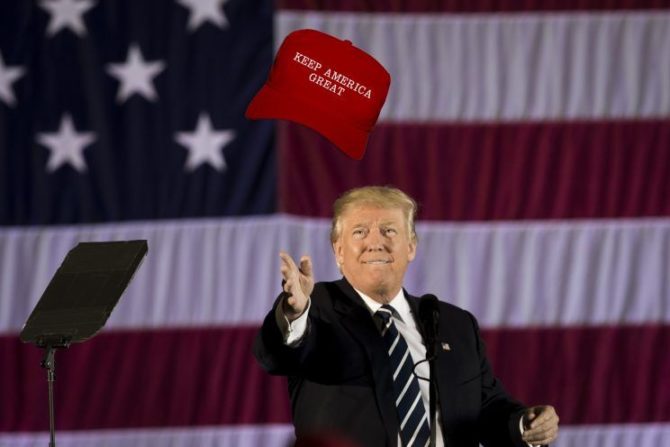 Less than one month into his presidency, which has been plagued with scandals, leaks, and high profile resignations, and Donald Trump is already kicking off his 2020 reelection campaign.

The “rally,” which was Donald’s word for “campaign event” during the 2016 president campaign, will be held Saturday at the Orlando-Melbourne International Airport in Melbourne, Florida and is being advertised via Trump’s personal Twitter page:

Join me in Florida this Saturday at 5pm for a rally at the Orlando-Melbourne International Airport!
Tickets: https://t.co/9jDy1tYkgE pic.twitter.com/GDhO6GGxwt

Tickets are available on the Trump/Pence campaign website. When a person registers, they are also given the option to subscribe for “campaign updates” as well as sign up to be a volunteer.

The idea of a “permanent campaign” has been floating around American political circles since 1980, when Sidney Blumenthal used it as the title for a book. It was during the presidency of Bill Clinton, whom Blumenthal advised, that the idea really came into practice. Even by the standards of modern-day presidents, Clinton loved politicking, and his team held on to campaign methods once in the White House, famously calling on polling to help determine its course. Newt Gingrich helped Republicans capture the House in 1994, in part by adopting the same tactics. Each of Clinton’s successors has adopted the permanent-campaign mentality to some degree.

We’re sure it’s only a matter of days before Donald starts selling 2020 merch made in China on his website. In the mean time, he’s hawking “45th President of the United States” t-shirts, koozies, and golf tool sets.