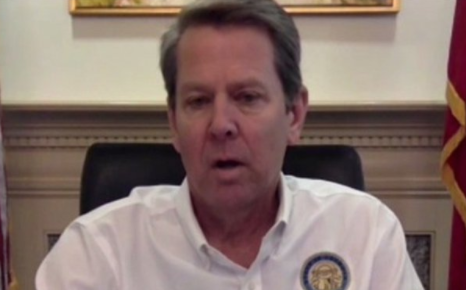 Republican Georgia governor Brian Kemp may have fallen out of favor with Donald Trump, but they seem to agree on at least one thing: There is a vaccine for AIDS. (To be clear: There is not.)

Defending his opposition to Covid-19 mask and vaccine mandates on a right-wing podcast, Kemp made a ridiculous comparison.

“We should focus on being civil and educating people about the [Covid vaccine] and not trying to bully them into taking it and work at it that way,” he told right-wing podcast host Erick Erickson.

“[The Covid vaccine] is basically how the AIDS vaccine worked. People wouldn’t take it early on because it was mandated, they started educating people and now it is doing a lot of good out there. Same scenario, different year that we are dealing with right now.”

Salon reports Kemp has used this argument before. “Well we are not going to have a statewide mask mandate,” he said previously. “[Commissioner of the Georgia Department of Public Health Dr. Kathleen] Tumi and I believe that they do not work. They did not work with the AIDS vaccine and they’re not going to work with the corona vaccine.”

According to Kemp’s representatives, the governor meant to say HPV, not AIDS. Both times?! Even if that were true, there are no state-wide HPV vaccine mandates for all residents. A small handful of states require it for students.

Only 44% of Georgia residents are fully vaccinated against Covid.

Understandably, the comments drew criticism on Twitter. Here’s what folks are saying:

"That's basically how the AIDS vaccine works. People wouldn't take it early on cause it was mandated. They started educating people and now it's doing a lot of good out there."

Dear Voters of Georgia: There is no AIDS vaccine. But Brian Kemp is your governor. There is a vaccine against that: vote.

Brian Kemp lies about AIDS vaccine mandates with the confidence of a Republican who knows the base will never trust fact-checkers.

Brian Kemp doesn’t know that there ISNT an AIDS vaccine?

And he is the Governor of the state that the CDC (Center of Disease Control) is located? pic.twitter.com/n0sr1Dooqo

Georgia’s very own, Brian Kemp, just claimed there was an “AIDS vaccine.” Georgia’s very own, Marjorie Taylor Greene, incited a deadly insurrection, and failed to disclose where she received $3.5 Million in fundraising. Both are failing Georgia. Vote her out. Vote him out.

I wonder where people can get this magical AIDS vaccine Gov. Brian Kemp keeps mentioning. Is the genius scientist who discovered it a Mar-a-Lago resident? Asking for a friend….?#Truth2Voice

Over the last year, Georgia Gov. Brian Kemp has gotten away with mentioning the failed AIDS vaccine and the AIDS mandate, both which are non-existent, because… pic.twitter.com/MjUTWVGw0k

Good morning to everyone who knows there's NO AIDS vaccine. Yep, looking at your dumbass Brian Kemp.