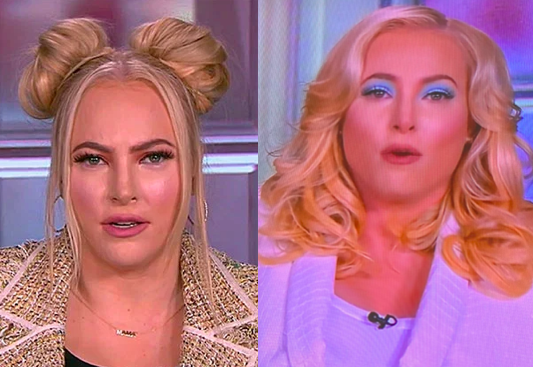 A lot has been said about Meghan McCain‘s hair and makeup lately, and hardly any of it has been good.

The View co-host has been widely ridiculed on social media for her, ahem, question style choices. Here’s just some of what people have been saying…

Meghan McCain on The View tomorrow, because her hair and makeup stylist is seriously trolling her.? pic.twitter.com/qo4QBYiEF9

Meghan McCain’s hair stylist continues to be a silent member of the resistance pic.twitter.com/oi0mJCpvHA

The one thing we know for sure: Meghan McCain's hair and makeup people hate her.

McCain eventually responded to the criticism late last week in a snarky tweet, writing, “People have a lot to say about me in general but in regards to my hair and makeup… I’m just having fun switching up, playing around and experimenting. It’s covid and I just had a baby, let a bitch live!”

People have a lot to say about me in general but in regards to my hair and makeup… I'm just having fun switching up, playing around and experimenting. It's covid and I just had a baby, let a bitch live! pic.twitter.com/Z8QGTyrgVA

Though she tried to make light of situation (and, yes, it is definitely a situation), it’s clear the 36-year-old is more bothered by the criticism than she’s letting on because today she tweeted a tabloid article and a shoutout to her hair and makeup person, Carmen Currie.

Related: Meghan McCain almost cries after Joy Behar says she didn’t miss her when she was on maternity leave

“Thank you ⁦@carmen_currie⁩ for your amazing work and vision!” she wrote. “And for bringing me back to life after having a baby! It’s a privilege to work with you.”

The tweet included a link to an “exclusive interview” Currie gave to the beauty blog HollywoodLife about Meghan’s “fun” looks.

Thank you ?@carmen_currie? for your amazing work and vision! And for bringing me back to life after having a baby! It’s a privilege to work with you. ????? https://t.co/c9QStsXOzr

Upset over the criticism, Meghan had her publicist pull a few strings to get someone, anyone, to write a complimentary puff piece about her. The publicist did their best and landed a feature on HollywoodLife.

The article uses adjectives like “stunning,” “buzzworthy,” “incredible,” and “creative” to describe McCain’s looks, saying that she has “rocked them all.” It only briefly mentions “some online shade from her haters,” but remains vague about it.

Unfortunately, the writeup only appears to have drawn more negative attention to McCain’s hair and make up choices.

She is not a fan of yours honey

I’m sorry but I think Carmen doesn’t like you!

Well at least we now all know what it would look like if Sailor Moon grew up and became a Republican.

Your hairstyle isn’t the reason(s) people dislike you.

You wear your hair like a 4 year old and act like a 12 year old. It is impossible to take you seriously. Please retire and become a full time mom