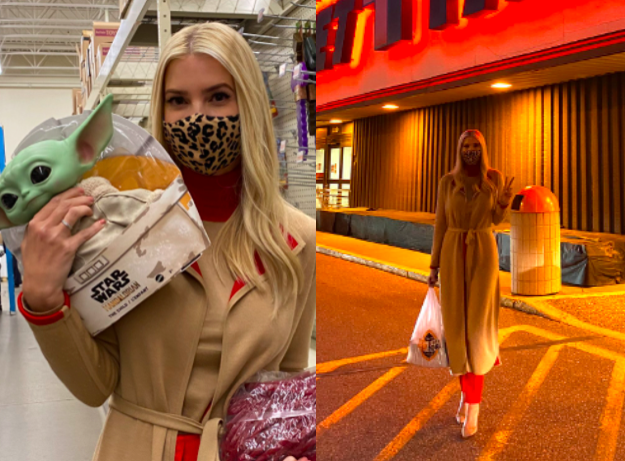 The Trump campaign has made it clear that they’re pushing hard to win the state of Minnesota in November after losing it by just one point to Hillary Clinton in 2016. Yesterday, both Mike Pence and Ivanka Trump visited the North Star State in hopes of courting new voters.

During her visit, Ivanka popped into Fleet Farm, a regional chain of discount department stores (sorta like a Midwestern version of Walmart but with slightly emphasis on outdoor supplies), to do a little shopping for her kiddos.

Clad in her designer shoes, designer coat, and a cheetah print face mask, the first daughter perused the empty aisles of goods made in China. Afterwards, she posted a picture of her everyman shopping excursion to Twitter, along with the caption, “When in the Midwest!” and an emoji of a John Deere tractor to make sure she hit on every possible Midwestern stereotype.

When in the Midwest! ? pic.twitter.com/CgByMGRRrF

Generally speaking, when staging a photo op trying to appeal to voters in a certain region, it’s usually a good idea to include at least one or two actual people who live in that region so it doesn’t look like they all dispersed the moment they saw you step in through the sliding glass doors.

Whatever Ivanka was hoping to accomplish with the stunt, she clearly wasn’t successful because nobody on Twitter seems to be buying what she’s selling.

What the actual fuck is this photo op? This feels like some Hannibal Shit

Pretty stereotypical representation of who you think lives in the Midwest.

Are we not supposed to notice the empty shelves that are due to the ongoing COVID pandemic that this administration has failed to address?

She takes a picture in front of empty shelves with a toy made in China and what looks like @TWIZZLERS. When in Rome! pic.twitter.com/bjfRE0QlR0

The aliens have landed. Is she photoshopped to look taller? pic.twitter.com/zRd3d5VYVD

Empty shelves and airborne viruses are definitely highlights of MAGA.

Everything has to be a photo op. Where’s the Midwest people and why those shelves are empty?

Early voting is already underway in Minnesota. Five separate polls find Biden leading Trump in the state by an average of 9 points. His biggest advantage is a 16-point lead in the ABC News/Washington Post poll released last week.

Related: Ivanka tweeted a video of Jared on a commercial flight and, of course, he’s not wearing a mask