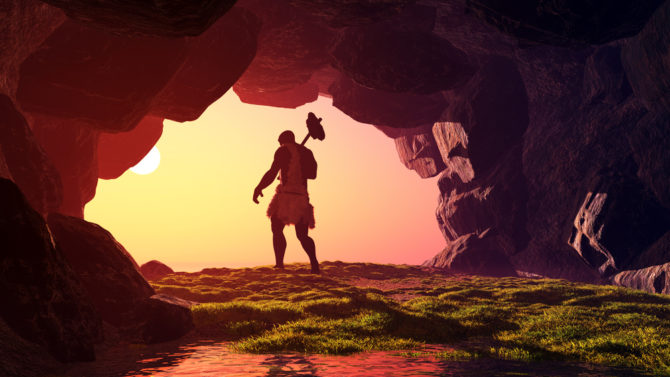 According to the Smithsonian, the Homo heidelbergensis lived about 700,000 to 200,000 years ago, during the Paleolithic era (a.k.a. the Stone Age), in Europe, Asia, and parts of eastern and southern Africa. They are credited with being the first early human species to hunt large animals and build shelters.

And, according to Todd Price over at GayPopBuzz, they were also probably the first hominid group to act upon feelings of same-sex attraction.

“There were likely gay cavemen,” Price writes in a fascinating new article. “What’s more, there were probably Paleolithic tops and bottoms. Shoot, there could have even been versatile cave gays.”

We bet there were.

So what was hooking up like for these guys anyway?

Price explains that anthropologists really aren’t sure, but most believe there weren’t any laws or religious orders dictating that homosexuality was immoral or wrong. So, chances are, cave people just followed their hearts (or loins) and had sex with whomever they desired without giving it a whole lot of thought.

A writer named Miko over at cavemanworld.com, an online database dedicated to all things caveman, concurs:

During the late Stone Age, tribal social structures were not very complex. The men would hunt, build, and protect the tribe. Women would serve as wives, nurture the young, and look after the village while the men were away hunting.

One theory is when all the males in the tribe went off hunting, some members of the group would develop an attraction towards their fellow hunting partners. Such could be the result of complex interpersonal social interaction between members of the same gender.

Sort of like Brokeback Mountain, but instead of cowboys, it was hunter gatherers.

Then, Price says, there were alpha males. He explains:

Our best guess is that most tribes of the era were led by an alpha male. One has to wonder if (as a sign of respect) the alpha was serviced by the others, meaning cavewomen and men.

Imagine for a moment that you were a gay caveman. Draining out the alpha was probably awesome! If you weren’t gay and gravitated towards the females, it still was probably OK.

Alpha males, Price adds, probably weren’t closeted either because “the only way alphas become alphas (in all animal species) is through skill, size and brute force.”

We really don’t know much about early man, let alone gay cavemen… [but] it’s safe to say homosexuality has been part of this world since the earliest primates showed up on the geologic time scale. We think that was sixty-five million years ago.

We know that homosexuality is common among other species, including such nearby cousins as Bonono apes. In fact, some studies have indicated that same-sex behavior is evident in nearly all animals, so we should not be surprised to learn of ‘shemale’ cavemen.

The last remaining question, Price says, is more technical than anything.

“What did gay cavemen use for lube?”

Related: Eating like a Caveman: An Argument for the Paleo Diet