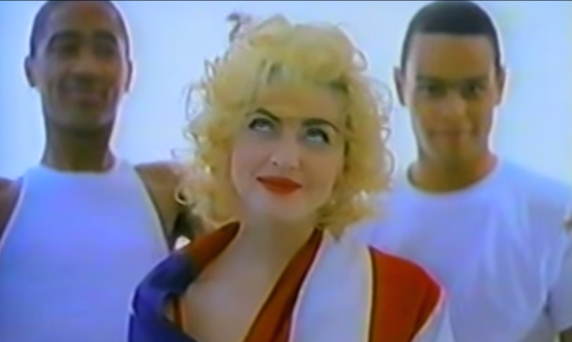 The year was 1990. George H.W. Bush was halfway through his first (and only) term as President. The 102nd United States Congress was about to be elected. Donald Trump was on the cover of Playboy. And MTV was still playing music videos.

In an effort increase turnout among people ages 18 to 24 for the 1990 midterm elections, which were held on this very day 28 years ago, music execs at Virgin Records launched Rock the Vote, a non-profit whose stated mission is “to engage and build the political power of young people.”

The very first Rock the Vote PSA aired on MTV and featured the Queen of Pop herself, Madonna.

In the 60-second TV spot, the always controversial pop star is seen wearing a red bikini and draped in an American flag. She is accompanied by two hot guys in cutoff denim shorts. She riffs an acapella rendition of her hit song “Vogue”, swapping out the words with “get up and vote!”, and spitting out some bars about the importance of the First Amendment:

Madonna also appeared another Rock the Vote PSA that year. The commercial, shot entirely in black and white, features the diva being pampered by her glam squad. Speaking in a faux-Brooklyn accent, she explains why it’s important to vote before throwing on a feather boa and sashaying off to cast her ballot.

Since these first PSAs aired nearly 30 years ago, Rock the Vote has teamed up with all sorts of popular musicians–including Janet Jackson, Deee-Lite, Jennifer Lopez, Marky Mark, and Christina Aguilera–as well as other celebrity spokespeople to continue promoting young voter turnout.

Related: These election day memes will help pass the time until the tally