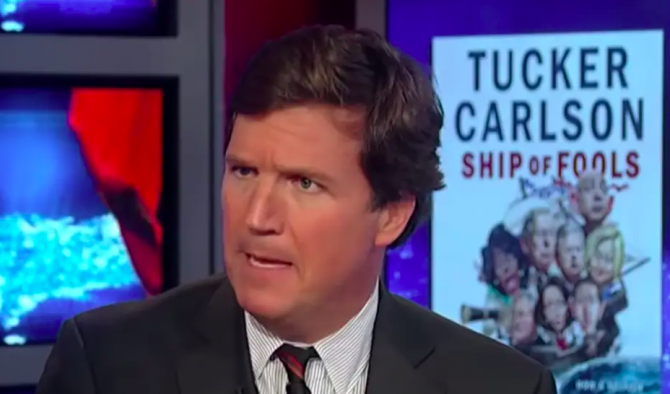 Blake Neff, the lead writer for admitted gay basher Tucker Carlson‘s Fox News propaganda show, abruptly resigned from the network on Friday after being outed for maintaining a secret account on a public internet forum where he regularly spewed homophobic, racist, and misogynistic bigotry for years and years.

As recently as one week ago, Neff, under the alias “CharlesXII,” commented on a thread titled “Would u let a JET BLACK congo n*gger do lasik eye surgery on u for 50% off?” where he wrote: “I wouldn’t get LASIK from an Asian for free, so no.”

And as recently as last month, Neff commented on one thread by writing, “Black doods staying inside playing Call of Duty is probably one of the biggest factors keeping crime down.”

On another one, he wrote, “Honestly given how tired black people always claim to be, maybe the real crisis is their lack of sleep,” as well as “the n*gs are always honor students or some bullsh*t.”

This is Blake Neff, the head writer for @TuckerCarlson's show who was forced to resign today after years of posting vile racist comments under a pseudonym "CharlesXII" (a nod to a celibate king of Sweden) and cyber-stalking women. pic.twitter.com/tEgLwVeJCN

In 2014, Neff joked about ‘”foodie f*ggots,” cracked jokes about Sandra Bland, and made disparaging remarks about Chinese people living in Canada.

Neff also kept a lengthy thread going for more than five years, in which he endlessly mocked an Asian woman, sharing personal information about her love life and encouraging others invade her privacy.

Without any trace of irony, Fox News CEO Suzanne Scott and President Jay Wallace issued an all-staff memo on Saturday, in which they condemned Neff’s “horrific racist, misogynistic and homophobic behavior.”

“Neff’s abhorrent conduct on this forum was never divulged to the show or the network until Friday, at which point we swiftly accepted his resignation,” the memo read. “Make no mistake, actions such as his cannot and will not be tolerated at any time in any part of our work force.”

Except, of course, when the “horrific racist, misogynistic and homophobic behavior” is being committed by their lead anchors. Then it’s tooootally fine. 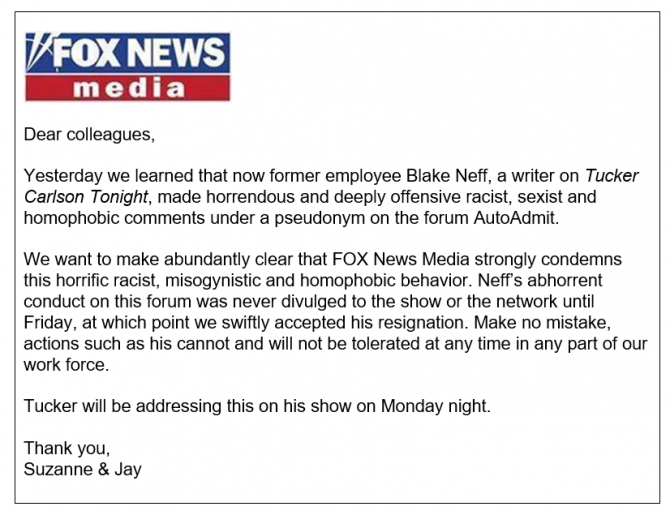 Neff had been with Fox News for about four years and served as Carlson’s top writer. In the past, Carlson has praised him for being a “wonderful writer” and even credited him in the acknowledgments of his book, “Ship of Fools.”

In a very recent article in the Dartmouth Alumni Magazine, Neff said, “Anything [Carlson is] reading off the teleprompter, the first draft was written by me,” adding that the show is “very aware that we do have that power to sway the conversation, so we try to use it responsibly.”

According to Fox News execs, Carlson will address Neff’s departure on his show during this evening’s broadcast.