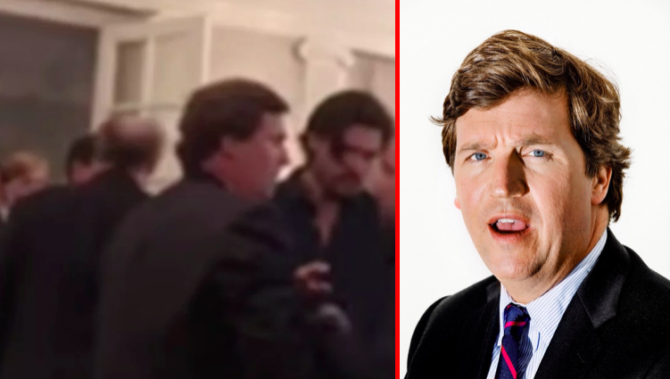 Professional douche bag and admitted gay basher Tucker Carlson is accused of assaulting a gay Latino man inside a swanky Virginia country club. The incident happened on October 13 at the Farmington Country Club in Charlottesville, Virginia.

Attorney Michael Avenatti tweeted a video of the Carlson shouting at Juan Manuel Granados inside the club, saying he and his legal team are “attempting to locate additional witnesses” as they build a case against the 49-year-old FOX News host.

“In particular, we need assistance identifying the balding man that grabs the man seated at the bar,” Avenatti tweeted. “We anticipate charges being filed. Anyone with knowledge, pls contact us.”

2/2 – We are attempting to locate additional witnesses and to identify those depicted in the video. In particular, we need assistance identifying the balding man that grabs the man seated at the bar. We anticipate charges being filed. Anyone with knowledge, pls contact us.

In the 45-second video, an irate Tucker can be seen screaming obscenities at Granados before a commotion breaks out.

After the video was leaked, Carlson issued a statement accusing Granados of starting things when he called Carlson’s 19-year-old daughter a “wh*re” and a “f*cking c*nt”, which prompted Carlson’s son to throw a glass wine in his face.

“Immediately after the incident, I described these events to the management of the Farmington Country Club,” Carlson writes. “The club spent more than three weeks investigating the incident. Last week, they revoked the man’s membership and threw him out of the club.”

Carlson, who has admitted to committing an act of violence against a gay man in the past, says it took “enormous self-control” for him not to beat the guy up with his chair which, he writes, “is what I wanted to do.”

“I did not assault this man, and neither did my son,” he insists. “Nor did I know the man was gay or Latino, not that it would have mattered. What happened … has nothing to do with identity politics. It was a grotesque violation of decency.”

But Granados tells a much different story. He says Carlson’s account is a “complete fabrication” and that he intends on pursuing charges against him and his son.

“Tucker threatened me with physical violence and told me to ‘Go back to where you came from’ before another patron started filming the incident,” Granados, who obtained his U.S. citizenship last September, says.

Granados adds a complete investigation will prove his version of the story to be truthful.

Related: Watch Tucker Carlson flip out over West Hollywood honoring Stormy Daniels… WHO IS NOT EVEN GAY!!!