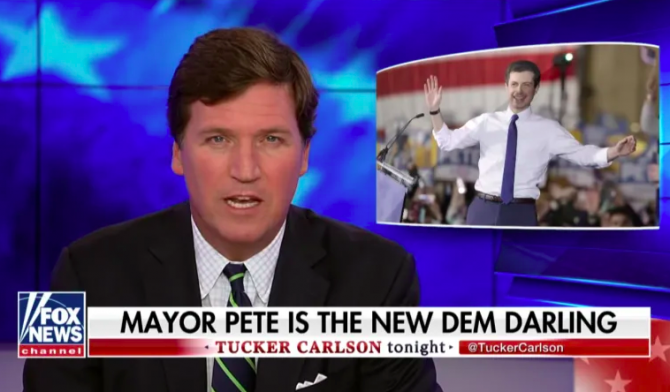 During the opening segment of his show Tuesday night, Carlson went on a bizarre rant about Pete Buttigieg that was simultaneously dripping in homophobia and homoeroticism.

Carlson started out by declaring the mayor of South Bend, Indiana as the new media darling, usurping former Rep. Beto O’Rourke, who also is running for president after his failed Senate bid against Ted Cruz last year.

“They’ve left you for a younger, hotter candidate,” Carlson said. “They split with some guy from Indiana. You can’t even pronounce the guy’s name.”

Next, Carlson played a short montage of media clips celebrating Buttigieg, including a clip of MSNBC host Nicolle Wallace saying, “This guy is chicken soup for my soul,” a reference to the series of internationally bestselling self-help books.

“Chicken soup for my soul?” Carlson said. “Even by the naughty standards of the news media, this is a new level of political commitment. They don’t just want to vote for this guy. They want to consume him, like a hearty stew.”

Related: Watch Tucker Carlson flip out over West Hollywood honoring Stormy Daniels… WHO IS NOT EVEN GAY!!!

Things got even weirder, when he looked seductively into the camera and cooed: “Every last drop of Buttigieg. Yum.”

The whole thing was, frankly, weird. Not to mention, vaguely perverted and a little bit creepy.

After watching this, if I was Pete Buttigieg, I would go straight to the local police station to get a restraining order against creepy @TuckerCarlson ASAP. @hillreporterhttps://t.co/aOu663lFDU

Well this ends the debate about whether Tucker Carlson has ever told a woman that it puts the lotion on its skin https://t.co/dBFb4mIeTF

I would like to file a restraining order against Tucker Carlson on behalf of Pete Buttigieg, please. https://t.co/RNJArDV5qC

Does… does Tucker Carlson want to eat @PeteButtigieg? pic.twitter.com/ErUgaT3A9U

Siri, show me Tucker Carlson bombing an audition for a serial killer role.

never would I have thought I’d be agreeing with Tucker Carlson but yes, I too am thirsty for Mayor Pete pic.twitter.com/TSViuZQzrl