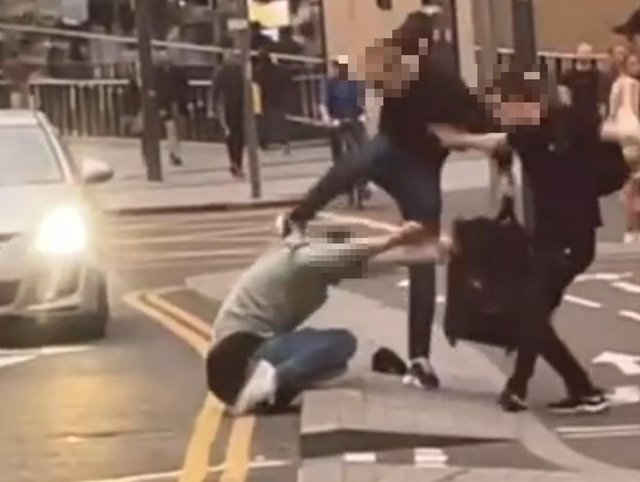 Police in Scotland have opened an inquiry into a brutal homophobic hate crime that took place July 31.

The incident saw a group of unidentified men beat and spit on a gay couple before pushing one man in front of a speeding car.

The Edinburgh News reports that the victims–a married couple, whose names have not been made public to protect their privacy–walked down Leith Street in a posh area of the city when they were approached by a group of four men.

The attackers began punching and spitting on the victims while yelling homophobic slurs. One man also stole a bag from the couple, and ran off into the night.

Video footage also shows that, at one point, one of the victims fell into traffic, narrowly escaping getting hit by a speeding car.

The victims, said to be in their 30s, later received treatment at a nearby hospital.

A bystander caught most of the attack on video; the person in question had previously been assaulted while trying to break up a similar attack, and chose to notify police rather than physically intervene. He said the sight of the attack left him “trembling.”

“The victim came straight over, thanked me and I asked if he was okay,” the bystander recalled.

“There was blood on the ground. He burst into tears and I held him as he sobbed so hard into my chest. He told me he did not know why they did it to him.”

“It was unprovoked entirely – the gay men did not fight back, they only tried to defend themselves,” the witness added.

“The boys were laughing, egging each other on and calling the victims p*ffs. Another girl [at the scene] heard them say p*ffs explicitly.”

In a more disturbing detail, several witnesses recalled that nobody tried to intervene in the attack. Drivers didn’t stop despite one of the victims getting pushed into traffic, while other passers-by stopped and laughed at the scene.

The attack on the couple in Edinburgh is just the latest in a frightening rash of attacks on gay men worldwide.

Last month, saw attacks on gay men in New York City and Spain in which both victims needed surgery for injuries. Another hate crime in Spain claimed the life of a young nurse, and ignited nationwide protests. In Ireland, a popular TV host also reported being assaulted on the street.

June also saw a rash of hate crimes against gay men, with one victim stabbed in the back during an assault. An unrelated crime saw police arrest a machete-wielding maniac who had targeted a group of gay diners.