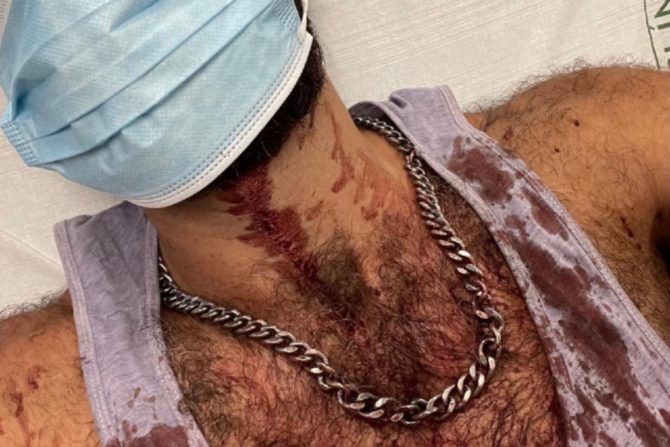 A gay, British tourist is in recovery following a horrifying attack in which assailants smashed his jaw with a hammer.

PinkNews reports that the man, identified only as “William” to protect his identity, had traveled to the city of Barcelona as part of his vacation. While returning to his hotel in the early morning hours of July 12, he happened to stop outside the Axel Hotel, a popular gay destination in the city. As he waited for his car service, two unidentified men approached him and hit him in the jaw with a hammer.

“There was a lot of blood coming out of my face and I could feel my mouth was destroyed,” William recalled. “In that moment I really feared for my life and felt that it could be the end of it.”

William tried to scream for help, but had trouble moving his jaw; the blow from the hammer had shattered the bone. The two assailants then grabbed William’s backpack and escaped the scene leaving him “in shock, bleeding, still processing and trying to understand why” he’s become the target of the attack.

Staff inside the Axel Hotel notified police and called for an ambulance. When the latter failed to show up, police rushed William to a nearby hospital. He subsequently underwent reconstructive surgery on his jaw July 15. Since then, William has also expressed his frustration with law enforcement for not treating the incident as a hate crime.

“Even if you look at this from the logical side of things, who approaches another person and the first thing you do is to smash a hammer in their face without them even knowing they were there?” William said.

William also confessed that he didn’t recall the men yelling any homophobic slurs during the attack, though he also says getting hit with a hammer also blurred his recollection of events. He also pointed out that as a gay man sitting outside a gay venue at the time of the incident, he had become a prime target for homophobes.

“I want to make one thing clear, I have no doubts that I was a victim of a hate crime, a homophobic attack,” he then added. “They didn’t smash my face with a hammer because they wanted to rob me. They could have stolen whatever they wanted in many different ways without smashing my face with a hammer. I was lying there in a very vulnerable position with my phone in my hands and all my belongings easily accessible. If they wanted to steal them, they would have done it easily.”

“This has to stop – starting from the police denying and turning a blind eye to all this,” William insisted. “I’m not the only one – I’m sure hundreds of people every day everywhere suffer similar or even worse things than I just did.”

The attack on William is just the latest in a series of extremely violent crimes against gay men in Spain and abroad. Earlier this month, the murder of Samuel Luiz in a homophobic beating sparked protests across the nation. Back in the United States, an altercation in Palm Springs left a gay man hospitalized earlier this week. Last month, an attack in San Diego resulted in the hospitalization of a gay man shot by attackers during a street robbery.