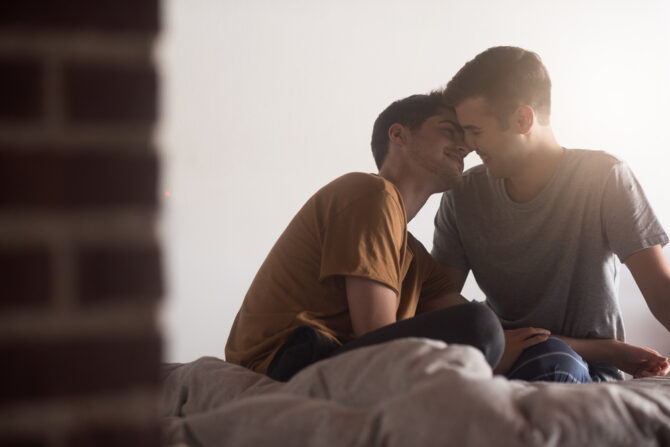 “I never understood why someone would want to sleep with another person than the person they are dating,” that user wrote in the r/askgaybros community. “I’m married, and I believe that my husband is the most beautiful person, and we just click like a puzzle piece. Why would I want to sleep with someone I find less attractive and less fun than my husband? … If you find someone more attractive or nicer, or both, why wouldn’t you just break up to be with the other person? Also, what would you consider cheating? Is an open relationship mainly focused on sex compared to a closed one?”

One generous commenter offered a long-winded explanation: “Some people are sexual gourmets and know that one person can’t be expected to satisfy all their kinks and turn-ons,” he wrote. “My boyfriend is a young, smooth bottom and very sexy for his type, but I also love bigger, more aggressive, hairy men. I can be into many types of men and still love being with my boyfriend most of all.”

But it “isn’t always about sex,” as that user added. “Some people are capable of having loving, intimate relationships with more than one person, even if their partner is their priority in life. I have several partners I’ve known long before I met my boyfriend whom I care about very much, even though they’re incompatible in a relationship sense. These are people I have a nice sexual connection with but I also just like as friends. I’m not interested in pursuing anything more with them; we’re just buddies who support each other, go out to lunch together, and, yes, sometimes have sex together.”

And what about cheating? “People in open relationships have to define that for themselves,” they added. “In general, it comes down to respecting established boundaries. Some people agree to only have sex with other people together. Others agree to only date other couples or only have sex on vacation. Some have a ‘don’t ask, don’t tell’ policy; others want to know all about every encounter. Some couples limit which activities they can engage in with other people. The parameters vary, but cheating is when those parameters are not respected.”

Related: Scientists say this is the key to making an open relationship work

Another person, meanwhile, pointed out that sexual incompatibilities can exist in romantic relationships. “For example, I tend to have a low sex drive. When I’m with someone with a high sex drive, I want them to go out and find guys rather than hoping I can be useful when I’m not,” the commenter wrote. “Or, I have been in situations where one of the people has a kink the other does not. Currently, I am a dom for a guy who loves to be a submissive pig, but his husband isn’t into kink. He can get that kinky enjoyment with me, and then he and his husband will have more vanilla sex that they both enjoy. People have different needs that don’t always align with their partner.”

Someone else piggybacked off that comment—no pun intended—and wrote: “The most successful open relationships I’ve seen are not the young, new, volatile couples still working through their trauma. It’s the older dudes who have been through thick and thin together, and worked through their sh*t, in part because they were willing to compromise and leave jealousy and societal norms behind. Instead of fighting it or calling it quits when libidos or kinks are mismatched, they found a solution that works for them by breaking the social norms. The thing is, these guys are not the ones you see all over Grindr. You could know them for years and not know that they are open, because it’s not the main focus of their relationship, just a facet of it. And for a lot of people, it’s also a very private one.”

Related: Man asks boyfriend for an open relationship and he says no… Now what?!

Another commenter said he’d sooner push for an open relationship than push his partner to be kinkier than his partner wants to be. “I think that would be a dumb thing to not get into or end a relationship over if everything else is perfect, and I just don’t see the big deal in having that kind of fun with someone else,” he said. “To me, that would be like not dating someone because you’re an avid cyclist, rock climber, LARPer, gamer, or do any other activity or hobby, but he’s not [into same]. You don’t have to have the exact same interests and do everything with your partner and shouldn’t forbid him to do something if you don’t want to yourself but he really does. That, to me, is being way too controlling and in no way a healthy relationship.”

And someone currently in an open relationship explained how it works for him: “Sex is tertiary in our relationship. We still frequently f*ck around … and f*ck dudes together. The sharing of passion, of lust, is still there. We’re still immensely physically intimate, even if it’s not entirely sexual. We started out this way, and early on, we agreed that we wanted to share our life but we didn’t want to deprive ourselves of the best life experiences possible. We acknowledged that neither of us fully encapsulate all the needs and wants that we want of sexual partners—we’re both only ourselves. If I want a Mexican paisa who looks like one of my uncles, my white husband can’t satisfy that need. I can’t satisfy all of my husband’s cravings either—I can’t be what I’m not. And rather than limit ourselves, we encourage fully embracing all of our desires and needs. This only works if people don’t get jealous and discuss it thoroughly. I don’t see myself going back to monogamy.”