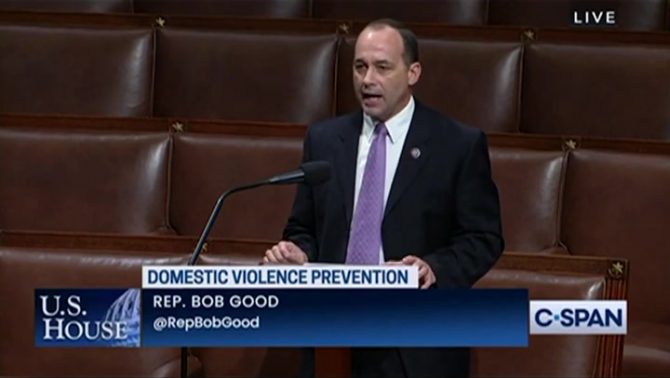 Rep. Bob Good of Virginia has gone viral after making remarks on the floor of the House of Representatives blaming marriage equality for all of society’s problems.

The Independent reports that Good make the declaration while debating over a new proposed piece of anti-domestic violence legislation. Specifically, Good said he opposes the bill over its gender identity protections.

“Nearly everything that plagues our society can be attributed to a failure to follow God’s law and his rules for and definition of marriage and family,” Good remarked. He further stated that protections for sexual orientation or gender identity would “coerce faith-based providers… to violate their deeply held beliefs or stop their work altogether.”

Related: Obama calls out GOP: “Are we still arguing about gay marriage? Really?

Already the comments have invited wide backlash on social media, and within the press. Author Hemant Mehta also took to Twitter to blast Good’s remarks, noting that he also might have had an ulterior motive in mind.

This is especially ironic since Bob Good previously worked as a fundraiser for Liberty University’s athletics program.

That's Liberty U., the school known for following God's rules… and for repeatedly ignoring/dismissing claims of sexual assault by female students. https://t.co/KRrYTeIAoZ

“This is especially ironic since Bob Good previously worked as a fundraiser for Liberty University’s athletics program,” Mehta wrote. “That’s Liberty U., the school known for following God’s rules… and for repeatedly ignoring/dismissing claims of sexual assault by female students.”

Liberty University, the notorious school founded by homophobic demagogue Jerry Fallwell, has endured wide criticism over its discriminatory treatment of LGBTQ students and faculty as well as women. A 2021 ProPublica investigation revealed that the institution “has led to school officials discouraging, dismissing and even blaming female students who have tried to come forward with claims of sexual assault.”

As for Rep. Good, despite his appeals over sexual morality, he has shown longtime support for Donald Trump, a thrice-married and admitted philanderer who has also bragged about assaulting women. Good has also endorsed Trump’s false claim that the 2020 election was rigged.