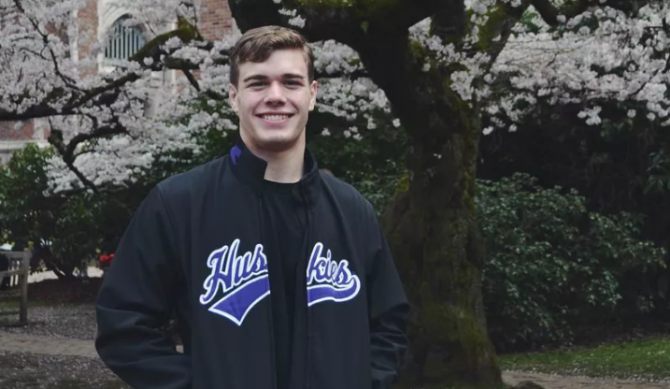 Liam Ball is no stranger to homophobic “locker room talk.”

Until recently, the high school senior and captain of his school’s wrestling team would frequently overhear his teammates cracking homophobic jokes after practice.

“I’d hear these kids in the locker room talking about stuff,” he tells OutSports in a new interview.

Some of that “stuff” included him. Earlier this school year, Liam came out to a few friends. Word quickly spread around school. It didn’t take long for his teammates to catch wind of the rumors and begin talking amongst themselves, though none of them addressed him directly about it.

“I figured it was time to come out to them and talk to them about it,” he says.

So he did something that took guts. He called a team meeting to address the issue head on.

“It was the scariest group to come out to because I spent so much time with them,” he recalls. “They were the bros, and I didn’t know how they’d take it.”

Liam stood before his 30-some teammates and told them that, yes, he was gay, that he wasn’t going to hide it, and that it was time for them to curb the homophobic language.

To his surprise, the response from his teammates was nothing but supportive. After sitting down with them, the “gay talk” immediately ceased.

“A lot of kids had my back after I had the conversation with them, which was nice. I grew with my team, and we had a much better connection after it happened.”

In February, the Seattle Times ran article about Liam shortly before a regional meet. The article mentioned he was gay. When other wrestlers from other teams gave him trouble for it, Liam refused to let it bother him.

“I just kind of ignored it and proved it on the mat. That’s kind of what you’ve got to do.”

He ended up winning nearly every match in the state of Washington until the Class 3A state final. His overall season record was 38-3, losing twice at a tournament in Idaho and just once in Washington.