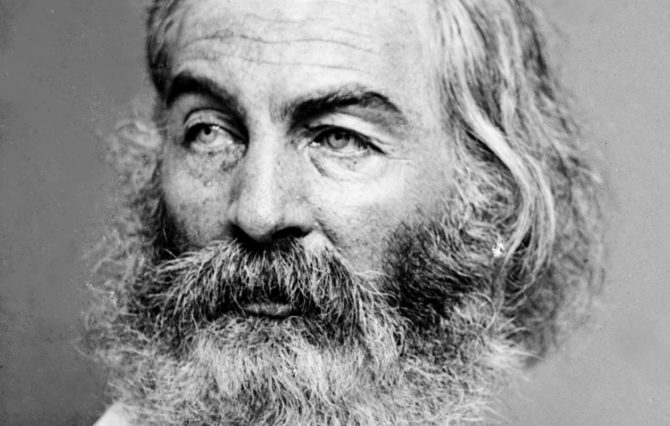 Walt Whitman would have turned 189 years old this week had he not succumbed to bronchial pneumonia way back in 1892.

To mark the occasion, Whitman superfan Hugh Ryan at Broadly has been poring over what appears to be a series of seven nude black and white photographs of a man who bears a striking resemblance to the great American poet.

The photos, labeled simply “Old Man,” were taken 141 years ago by famed artist and photographer Thomas Eakins (July 25, 1844 – June 25, 1916). They depict a slender man (with just a slight ponch) with a long white beard fully naked from several different angles: full-on, in profile, and from behind.

Unfortunately, we can’t publish them (we’re a family site!), but you can see them HERE.

Ryan sent the photos to several different Walt Whitman experts to get their opinions.

Karen Karbiener, a Whitman scholar and professor at NYU, replied to Ryan’s inquiry by saying:

The size fits. He was six feet tall, never had a gut, was always in reasonably good shape even when he was older… I haven’t seen a lot of 80-year-old men naked, but presumably this is good shape for an 80-year-old man!

Not just that, Karbiener said, but Whitman was one of the most photographed men of the 19th century, and he also wasn’t shy about things like sex and nudity, as anyone whose read Leaves of Grass knows.

“I don’t think Walt would have any shame about posing for these,” she hypothesized. “Especially for Eakins. There was a mutual affection and respect there.”

Eakins and Whitman met around 1887 and bonded, no doubt, over their mutual affection for younger gentlemen.

Ryan also approached Ed Folsom, a Whitman scholar and co-director of the Walt Whitman Archive online, about the photos.

Folsom wasn’t sure if the man in the photo was Whitman, so he submitted them to a neurologist. His hope was that the neurologist would find physical evidence of the strokes and other health problems Whitman suffered in the years when this photo was taken. (Whitman had his first of several strokes in 1873.)

In his investigation, Ryan concludes:

Whitman would have been 198 years old today; were he still alive, perhaps that photo would grace his Grindr profile. Some might consider it indecorous to commemorate one of America’s literary treasures with an investigation into his penis, but it’s oddly fitting for Whitman. This was a man who loved puzzles, new technology, and—yes—penises. He reveled in the body, and in thumbing his nose at Victorian morality. Sharing this photo, whether or not it is actually of Whitman himself, is perhaps the most Whitman-ic way we could celebrate his birthday.