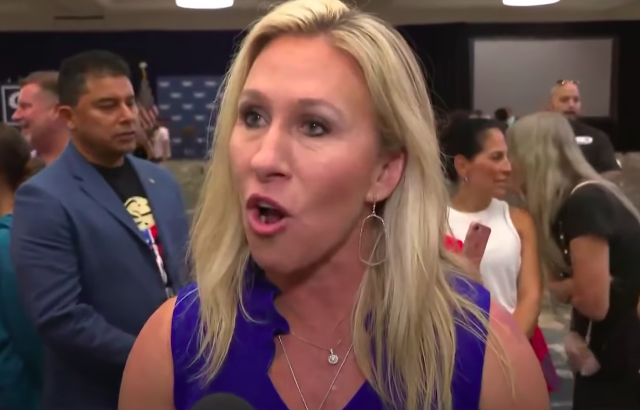 Fresh off the heels of comparing mask mandates to the yellow stars European Jews were forced to wear during the Holocaust, Rep. Marjorie Taylor Greene has become ensnared in yet another Nazi scandal. This time it’s involving a hypothetical statue of Adolf Hitler.

Recently unearthed video shows the QAnon congresswoman arguing about monuments during a city council meeting. It was recorded in June 2020, shortly after she won her GOP primary, and shared on Twitter this week by reporter Jake Sherman.

?tipster sent me this video.@mtgreenee said she would not support taking down a statue of Hitler or Satan even though she “fully disagrees" with them.

her reaason: “so that i can tell my children and teach others about who they are and what they did"https://t.co/anZmqqV9Lj

In it, then-candidate Greene is seen speaking before the city council in Dalton, Georgia. She bemoans “attacks” on statues of figures like George Washington, Abe Lincoln, and Christopher Columbus, saying she’s opposed to removing monuments of people she “fully disagree[s] with.”

Then she names Adolf Hitler and “Satan himself” as examples, telling the council, “I would not want to say take it down” in an effort to “teach others about who these people are, what they did.”

Marjorie Taylor Greene claimed during remarks last year that she wouldn't support the removal of hypothetical statues of Hitler or Satan "so that I could tell my children and teach others about who these people are."

Yesterday, House Minority Leader Kevin McCarthy issued a statement condemning Greene’s comments about mask mandates and the Holocaust, saying, “Marjorie is wrong, and her intentional decision to compare the horrors of the Holocaust with wearing masks is appalling.”

He added, “The Holocaust is the greatest atrocity committed in history. The fact that this needs to be said is deeply troubling.”

Neither he nor Greene have issued any comment on this latest video of her championing statues of Hitler. Although folx on Twitter sure have a lot to say about it…

No matter how many weak letters written by Kevin McCarthy, the GOP owns 100% of the antisemitism and hatred from Hitler and Satan statue loving Marjorie Taylor Greene.

Marjorie Taylor Greene does not want the historical statues of Hitler and Satan removed from her patio.

After Nazi Germany, statues of Hitler were removed. Yet, no German forgot the Holocaust. In fact, every child is well-educated on Germany's awful history.

But of course Marjorie Taylor Greene would argue to keep statues of Hitler and Satan, considering they seem to be her idols.

An exclusive look at the statues of Hitler and Satan in Marjorie Taylor Greene's back garden: pic.twitter.com/3NJ7tv59BR

If Marjorie Taylor Greene's contribution to America is making the left call for an end to Hitler analogies, we need to make space for her on Mount Rushmore.

Let me see if I have this straight. Marjorie Taylor Greene needs a statue of Adolf Hitler to remember history, but Tulsa, Oklahoma can't convince the federal government to add the historic black neighborhood of Greenwood to the National Register of Historic Places.

Marjorie Taylor Greene's argument about keeping statues of "Hitler or Satan" to teach her children is bullshit.

Marjorie Taylor Greene wouldn't see a Confederate statue and teach her children about slavery. She'd teach them to be proud of their whiteness.

Satan, Hitler, and the Holocaust, 3 things I'd never want associated with my name!
Marjorie Taylor Greene, you win the Trifecta!!#ExpelMarjorieTaylorGreene

I do not wish to be associated with Marjorie Taylor Greene.
—Adolf Hitler