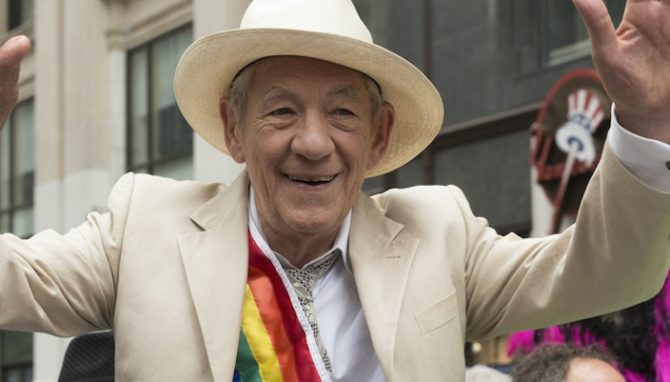 The new program will help end disparities in standards of living and social isolation of LGBTQ seniors in the UK. It will also help establish a queer community for people over 50, and also provide healthcare and social services. McKellen helped launch the initiative through a partnership with the UK-based LGBT Foundation.

“No one is born with prejudice, it’s something you learn,” McKellen said during the announcement. “Growing up, even in Lancashire, what is now Greater Manchester, 70 years ago, it was a total silence. There was no mention of sexuality other than heterosexuality at school, on the radio, in church. Absolute silence. So is it any wonder that people who are older, when things are hazy, they may think back to a time when things were different? Waving the banner for full and total equality, and love, is something that has my total support.”

“We’re incredibly grateful to Sir Ian for launching this incredibly important new initiative,” said Paul Martin OBE, Chief Executive of LGBT Foundation. “We know that LGBT people over 50 are at a much higher risk of isolation and are under-recognized in health and social care services, and may be facing discrimination due to their sexual orientation or gender identity. We believe that all LGBT people over 50 have the right to an excellent quality of life in later years, and look forward to working to end the many inequalities that LGBT in mid-to-later life face.”

LGBTQ seniors have a much higher rate of homelessness, and have lower access to healthcare, living facilities and social services than their heterosexual counterparts. In the United States, California remains the only state in the union to offer state services to queer seniors.