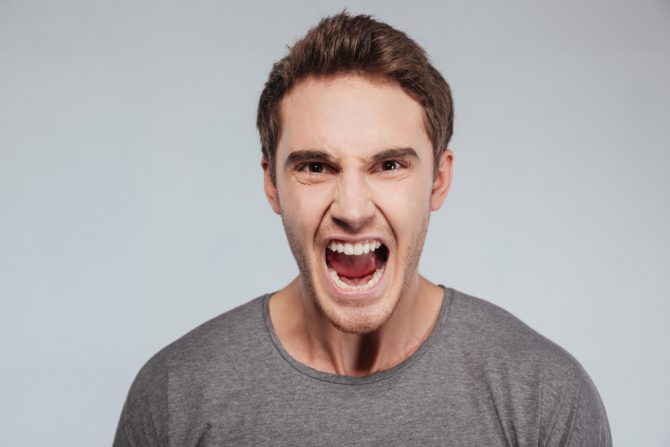 I’m in a toxic relationship, one where we both know we’re terrible for each other but I just can’t let it go. After the screaming, yelling and possibly even physical fighting is over I just find him so sexy I can’t help it. It’s like it’s just so exciting to me. Seeing him get mad, me getting mad and saying things we probably mean but also don’t. The making up is good too whether it be sex, or just acting like nothing happened, I love it all I don’t want a “normal” relationship. So what’s wrong with me!? Why am I addicted to this person and this type of relationship?

The good news here is you acknowledge your relationship is toxic. Many people caught in this dynamic of emotional or physical abuse don’t even really understand that it’s an unhealthy relationship, as it’s just what they’re used to. They assume all relationships have their ups and downs, or it’s what they witnessed in their families of origin, so deem it as “normal.” But let’s be clear, emotional and physical abuse is not OK by any means.

In your case, you acknowledge it’s bad for you, but can’t get enough of it anyway. You know that it can get ugly, that your partner can drive you crazy or make you furious, yet there’s something oddly attractive about that. Don’t forget the word “intoxicating,” which usually means something is very alluring, has the word “toxic” in it. Even though you crave this dynamic, it can also cause you much pain.

Often what is happening here is a psychological addiction to the ups and downs of this kind of relationship. The highs are highs, and the lows are lows. As you mentioned, when you fight, you get to make up again, and that can be much more exciting than a “healthy” relationship, kind of like being on a roller coaster instead of the trolly. This addiction can often feel like a pull beyond your control. You may even swear that after the latest fight, you’re never going back to him again, that you’re totally done this time, but as soon as he makes a gesture, you’re right back in.

Often the addiction to this kind of relationship is literally chemical. Our brain is structured in a way that when we feel happy, dopamine is released. When you are fighting and then make up again, the love and affection in that “make-up stage” can feel amazing, and release dopamine into the brain, acting as a “reward.” Therefore, we may even unconsciously fight with our partner in order to create a dynamic where we will have to make up again, thus signaling the brain to create more dopamine “Like the compulsive gambler anticipating the big pay-off, the toxic relationship addict is waiting for the jackpot of love and affection from the other person,” Billi Gordon PH.D. writes in Psychology Today. Not knowing if the make-up reward is actually coming or not also releases adrenaline, which is another addicting stimulant.

Like drugs or other addicting behaviors, the first thing to assess is the cost to your overall well-being. Is the “fix” from this adrenaline or dopamine high worth the overall unhappiness you may feel in your life? Are you putting yourself at risk emotionally or physically? According to the National Network to End Domestic Violence, each day three women die from domestic violence. It’s also extremely common in LGBTQ relationships.

The National Coalition Against Domestic Violence says, “recent research shows that LGBTQ members fall victim to domestic violence at equal or even higher rates compared to their heterosexual counterparts.” Even a mild threat of danger isn’t worth the risk. You may be thinking, “but it rarely gets physical.” Emotional abuse can be extremely damaging as well, lowering your self-worth and self-esteem, causing anxiety, and even illness from being constantly under stress.

If your inner Jake Gyllenhaal is simply saying “I wish I knew how to quit you,” you may need additional help and support. Get yourself into therapy (individual, not couples), or chat with the National Domestic Violence Hotline. You might miss the adrenaline, but the rush of taking care of yourself in a loving way is also pretty damn sweet.

Jake Myers is a Licensed Marriage & Family Therapist and the founder of Gay Therapy Space, the first LGBTQ owned and operated platform for online therapy, for and by the community.

Do you have a question for Jake? Email [email protected]