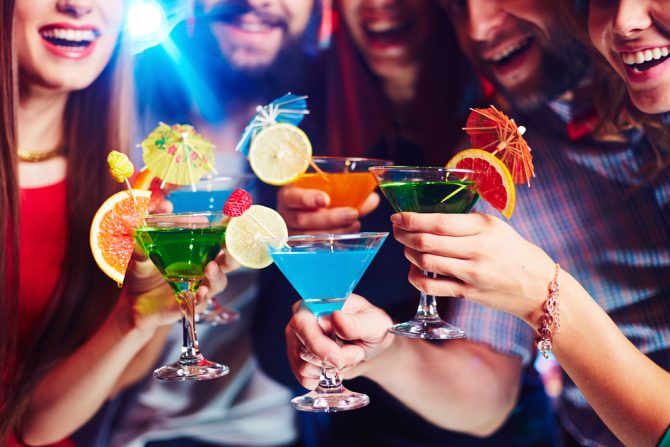 I was at a holiday party recently when someone asked if I wanted a drink.

“No thanks,” I declined.

“Are you sure?” he replied.

“I’m fine with water,” I answered.

After he called my choice of beverage “boring” (I’ll admit, water is kinda boring, but so are a lot of things), he kept pressuring me to have a cocktail… or a glass of wine… or a bottle of beer… or a shot. Finally, I just had to be completely forthright.

He looked back at me with a shocked expression on his face. “Like… ever?” he asked, incredulously. And when I answered in the affirmative, he acted even more shocked. “Wait, wait, wait,” he said in feigned disbelief, “you’re telling me you don’t drink? Not ever? Not even at a party?”

I can’t tell you how many times some variation of this conversation has played out in my life. I’m at a holiday party, or a wedding, or a dinner and word gets out that I don’t drink. Someone in the group inevitably cannot believe it. Often they call me “boring.” Sometimes they want to know why.

It happens at restaurants, too. Everyone will order drinks and when the waiter or waitress gets to me, I’ll say I’m fine with water, and he or she will say something like, “The bartender makes a great mojito” or “Not even a glass of wine?”

I know 99% of these people don’t mean to be pushy or rude or insensitive, and they almost always back down when I tell them I’m not a drinker. Some even apologize and feel bad. And then I feel bad for making them feel bad. Which is why I decided to write this essay. My hope is that it can help us all stop feeling bad about an issue nobody should feel bad about in the first place.

When a person turns down an alcoholic beverage or says “I don’t drink,” it’s usually best to leave it at that. Just say “OK” or “no problem” or, if you really want to be polite, offer to get them something non-alcoholic or fix them a mocktail. Or don’t say anything at all. That’s fine, too. Most sober people are 100% fine not talking about their sobriety with people they don’t know.

What you shouldn’t do is act flabbergasted, like you can’t believe they would go to a holiday party and not consume alcohol. You also shouldn’t say things like “That’s boring!” or “You’re no fun!” And you definitely shouldn’t ask, “Why not?” Not only is this question rude, but it’s none of your business. Anyway, do you really care? Maybe it’s just me, but I can’t think of anything more uninteresting than another person’s beverage preferences.

Now, there are a lot of reasons why people don’t drink.

Personally, I don’t drink because last February I was diagnosed with a neurological disease that causes me to experience chronic pain and headaches. I’ve been learning how to manage it, though, through help from a neurologist, physical therapy, medicine, and making lifestyle changes, one of which was giving up booze.

If I drink even half a glass of wine, it sets off a trigger in my brain, which sends out pain signals that can fire off for days. The last time I had a glass of wine, I felt the after effects for six days. So I don’t drink. It’s not worth it to me. And it sucks because I used to love a good happy hour.

Having chronic pain is not something I talk about often (until now), not even with my family, and especially not with strangers at holiday parties, because it’s not something I’m particularly interested in talking about, and I’m pretty sure nobody else is interested either. (Honestly, who under the age of 80 enjoys taking about their health problems? On that note, do 80-year-olds even enjoy it?) I’d much rather discuss Saeed Jones’ new memoir (which is incredible) or the latest news of Queerty (which I read every day).

I have a friend who doesn’t drink because she doesn’t enjoy the feeling of being intoxicated. She tried it a few times and it just wasn’t her thing. So she became a proud teetotaler. But she has no qualms with other people drinking. And she can still have a great time at a holiday party without nursing a peppermint martini.

Of course, there’s no shame in being an alcoholic. It’s well understood that alcohol addiction is a disease, not a moral failing, and is not reflective of a person’s character. It’s also very common. One in 12 people struggle with alcohol use disorder. But most alcoholics would rather not have to say, “I’d love that glass of eggnog, but I can’t because I’m in AA.” Nor should they have to.

So as the countdown to 2020 approaches, if someone declines a glass of champagne at midnight, don’t look back at them with crazy eyes and call them boring, don’t pressure them to drink just because you think that’s the only way to have a good time, and please, for the love of god, don’t ask them “Why not?” Just say “Happy New Year!” and leave it at that. Respect their sobriety and everyone can enjoy themselves.