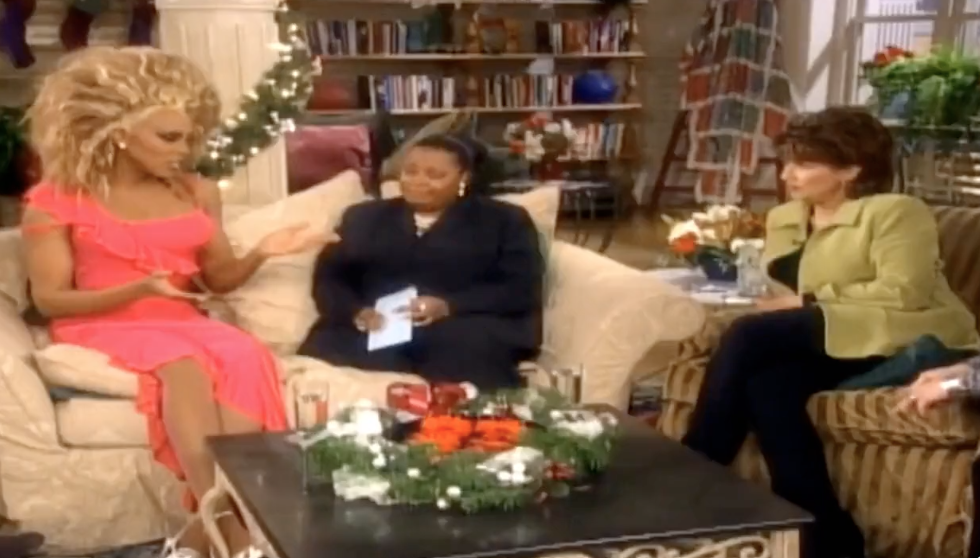 Old footage of RuPaul getting into a catfight with Joy Behar on The View has resurfaced yet again and it’s been making the rounds on social media for the last week.

The clip, which seems to get recycled every five years or so, was recorded back in 1997. What started out as friendly banter between two comedians quickly turned mean when the drag queen described Joy’s style as “butch.”

Related: Rosie O’Donnell just spilled a whole pot of toxic tea about “The View” and OMG you guys

To which, RuPaul replied, “Meow!”

(For the record: There’s nothing wrong with a woman being butch. But, alas, it was the ’90s.)

Later, Ru mocked Joy’s raspy voice, saying, “That was not a mean thing. I’m just stating facts. She came on my show, talking about, ‘You look like a… Why is that that you look so great in a dress and I can’t–‘”

That’s when Joy jumped in again to say, “You know what, I take it back. The butch comment was a compliment, but the voice is not.”

Related: The View’s Sherri Shepherd on her antigay past, pay discrimination, and mean girl Barbara Walters

“I love the haircut,” she said. “The hair looks great. And you’re wearing nice colors and stuff. But the slacks…”

“Do you think I’m gonna take fashion advice from a drag queen?” Joy spat back.

We’re happy to report the two have since made up.

Re-live the catty exchange below.