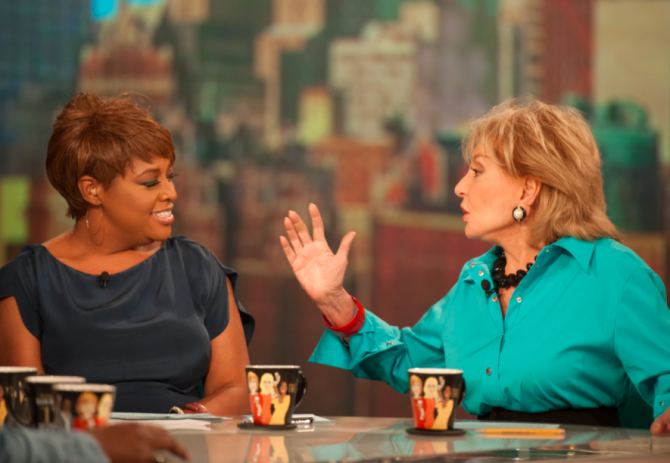 In a revealing new interview with People, Sherri Shepard, former co-host of The View, opens up about her time on the hit morning talk show.

Shepherd appeared on the show from 2007 to 2014 before she was released from her contract following backlash over antigay remarks she had made on the air.

Looking back on the whole experience, Shepherd has mixed emotions.

“It was the most painful experience that I’ve ever gone through,” the 53-year-old says, “but it was the best experience.”

Part of what made it hard was–surprise, surprise–working with Barbara Walters.

At one point, Shepherd remembers the legendary journalist telling her, “I love you. I just need you to read a book, dear.”

While dealing with Walters was challenging, Shepherd says it was actually the response to her remarks about Christianity and the LGBTQ community that proved to be the hardest thing for her to deal with.

Over the years, Shepherd made several insensitive and blatantly homophobic comments about LGBTQ people, including blaming gay men for spreading HIV to heterosexual black women, and frequently using the “love the sinner, hate the sin” argument when talking about homosexuality, in general.

Recalls Shepherd, “When people wanted to cancel me and take out full-page ads on me and take it outside The View, I would cry. Because I would go, ‘If you knew my heart.’ I came from doing standup and making people laugh and doing sitcoms.”

She continues, “I wish we were a culture of loving and going, ‘Let’s just see, hold on before we go, click, your entire life is done, your livelihood. You can never come back from this.’”

Shepherd says she has evolved since then and no longer holds her homophobic views or judges LGBTQ people.

“You love who you love,” she says today. “I’ve evolved. Look, my best friend, my best friend Tommy Borden, he’s been married to his husband, Jimmy, for the last 17 years. I couldn’t even make two marriages work past six years. Who am I to be judging anybody?”

Later in the interview, Shepherd gives credit to Rosie O’Donnell for sticking up for her when she was offered pennies on the dollar to the other co-hosts, which is an unfair reality for many Black women in America, who, on average, make 38% less than white men and 21% less than white women.

“I thank Rosie O’Donnell to this day,” says Shepherd, “because when I was being asked to join The View, they offered me less than Elisabeth Hasselbeck, who had only done Survivor and worked for Puma, making the tennis shoes.”

“There was no way I should have been offered less than Elisabeth Hasselbeck with my credits,” she continues.

Shepherd recently made an appearance on The Masked Singer, and last year she started hosting the game show Best Ever Trivia Show on the Game Show Network.

Related: Sherri Shepard On Her Antigay Comments: “I Embrace Everybody Who Has Love In Their Hearts”