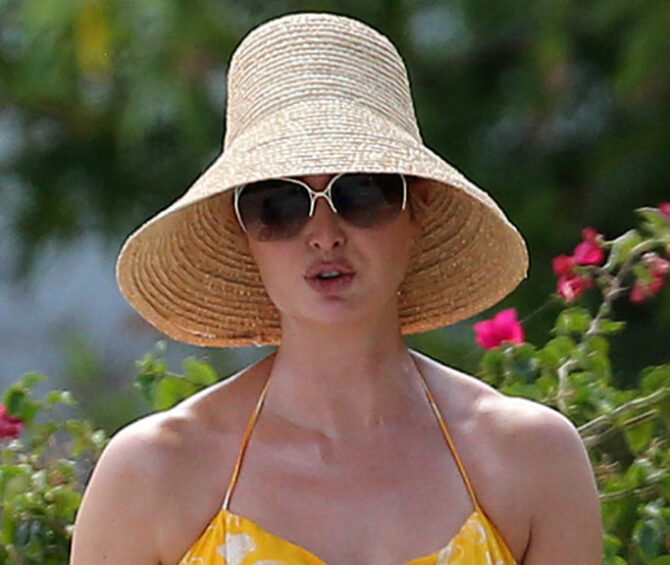 As Ivanka continues to ignore the scary letter she received from the House select committee looking into January 6 asking for her cooperation in the investigation, her new neighbors in Florida are getting mighty sick of living by her.

Ivanka and Jared have been renting a beachfront condo in the posh town of Surfside for the past year as they build their $30+ million dream home on nearby Indian Creek Island, a.k.a. “Billionaire Bunker”.

Related: Ivanka hasn’t even moved into her new mansion yet and she’s already driving down property values

But according to the Washingtonian, the couple have not made a good impression on the other Surfside residents.

One neighbor, who asked to remain anonymous, told the magazine about a tense encounter she had with Ivanka last summer.

The former White House adviser was walking her Pomeranian mix toward the beach “right past a sign that clearly said dogs weren’t allowed,” the woman, a beach activist with a passion for protecting loggerhead sea turtles, recalls.

“I was speed-walking at her and yelling at her. I just opened my mouth and said, ‘You can’t go out there with the dog!’”

Ivanka played dumb by pretending she didn’t know, to which the neighbor replied, “You’re standing right next to the sign. Look, it says ‘No dogs.’”

It was the first of many awkward interactions the woman has had with Ivanka and Jared, who she calls “Slenderman”, over the past several months.

She says each encounter with Ivanka only reinforces a long-held impression: “She seems to be about . . . ‘I live in this little cocoon where the rules don’t apply to me’ . . . in her own little world.”

(Giving credit where credit is due, the woman adds that, while Ivanka may be a sh*tty neighbor, at least she looks good, noting: “She’s well put together. She’s had a lot of work done, and it’s good plastic. It’s Miami, and there’s a lot of bad plastic here. She has good plastic.”)

She adds that she doesn’t want any part in the toxic couple’s reinvention act in South Florida and wonders, “What are they doing in our town?”

“They’re not just here passing through,” he says. “I believe they want to make this a big part of their life, this part of the state of Florida generally, and specifically Surfside.”

He adds that he’s had limited interactions with them, but the few times he has spoken to them have been “very generic.”

Despite Ivanka ignoring a request for an interview, the January 6 committee is pressing on with its investigation. So far, it has interviewed nearly 500 witnesses and obtained the phone records of Kimberly Guilfoyle and Eric Trump.

Mary Trump recently told MSNBC’s Alex Witt that she believes Ivanka is well aware that she’s in “a very bad situation” and is probably freaking out.

“She knows she has to come down on the right side of things. Or, she’ll continue to stay her father’s ally, and have to see how that plays out,” she said. “She’s in a very bad situation because she must understand that if Donald feels it’s necessary, he will stop protecting her.”